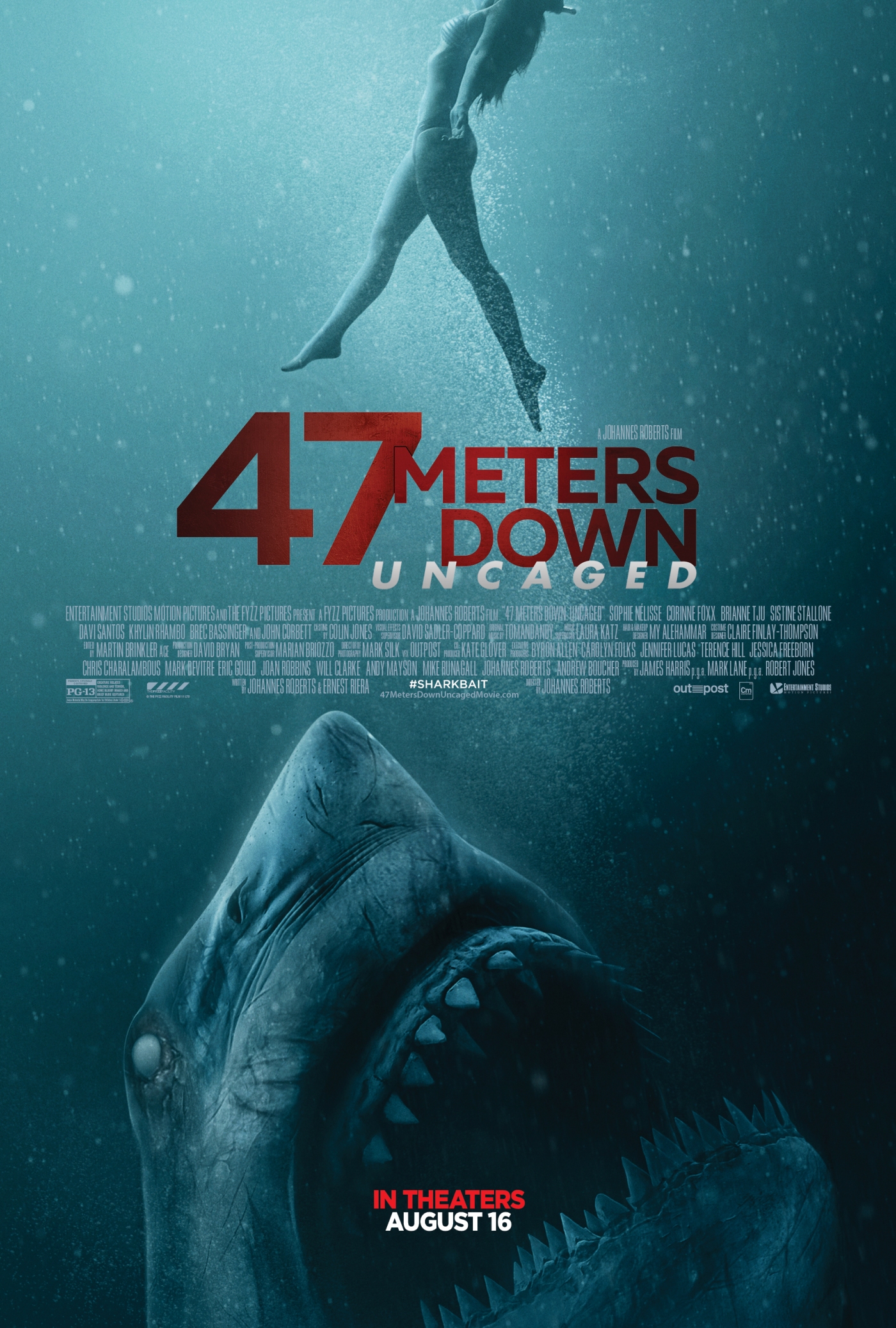 Summer might be close to over, but there’s always time for another killer shark movie. While last year’s major fish flick was Jon Turteltaub’s The Meg, this year’s is the sequel to 47 Meters Down. Though 2017’s original didn’t make much of a splash overall, it’s $62 million haul was still more than enough to make up its modest budget of just $5 million, and especially so for a movie originally planned for VOD. That was success enough for Entertainment Studios to sanction a sequel, and though Uncaged is certainly nothing new, fans of the first are unlikely to be disappointed.

At first glance, 2017’s 47 Meters Down appeared to be low-bar trash on a level similar to The Asylum’s direct-to-video Mega Shark series. A VOD release originally produced by Dimension Films, but was then purchased by Entertainment Studios, a media company which has never delved into film at all? That couldn’t be anything good. Except that it was. Nominally so, perhaps, but as one of the first feature-length pictures filmed almost entirely underwater, this run-of-the-mill Jaws rip-off was more inventive and suspenseful than what first met the eye.

Featuring a pair of sisters stranded in a shark cage on the ocean floor, the film was directed by Johannes Roberts, an obscure British filmmaker who has helmed a number of low-budget horror flicks over the years, and he’s picked up just enough tricks to craft an effective enough offering for the mainstream. Essentially taking Matt Hooper’s shark cage scene from Jaws and fleshing it out into a full movie, 47 Meters Down leveraged the large number of underwater hazards such as claustrophobia, lack of light and oxygen to amount to one crafty, pulse-pounding thriller.

You might wonder, how could someone make a sequel to this without doing the exact same thing over again? Your answer is 47 Meters Down: Uncaged. Roberts basically takes the same concept, that of characters stuck deep underwater with a host of toothed predators, and, you guessed it, takes the shark cage out of the picture. In the original, the shark cage acted less as a tool for confinement, and more as the lone safe space in a vast ocean in which sharks could be anywhere. You might think this would lessen the sense of claustrophobia here, but Roberts has you covered.

To make things a little more interesting, Uncaged is set almost entirely in the underwater ruins of an ancient civilization. Sophie Nélisse and Corinne Foxx star as Mia and Sasha, two teenage sisters who have recently been brought together by adoption after Mia’s parents died. Their father is an archaeologist who has been working to excavate a submerged Aztec city. The girls know where his team stashes their scuba gear, and the sisters give in to peer pressure from their friends Alexa (Brianne Tju) and Nicole (Sistine Stallone) to dive down and see the city’s entrance.

After a ghoulish-looking blind cave fish gives one of the girls a start, some pillars get knocked over to trap the group inside the caves of the underwater city. Their only hope is to swim through the tunnels to find a way out, but they are soon to realize that they’re not alone. Like the blind cave fish, the cave is also home to a group of great white sharks who found their way in from a passage to the ocean. The girls only have enough oxygen left in their tanks for a short amount of time, and if they don’t find the way out of the cave soon, they’re sure to either drown or be eaten.

Like the original, this new 47 Meters Down features many of the same perils which compound to make the situation truly dire: the girls are trapped (presumably) 47 meters underwater, with only scuba gear keeping them alive. Oxygen is in short supply, so talking, breathing too heavily or exerting yourself is to be avoided, and that’s a hard thing to do with a hoard of sharks on your tail. There is very little light, and things are extremely cramped. The only thing lacking from the first is the temptation to swim up to the surface, which is likely to give you the lethal bends.

Uncaged lacks the element of stripped-down experimentation that highlighted its predecessor’s strengths within limitation, but the new angle of exploration of a lost civilization offers enough intrigue to offset the irritation that embarking on this unnecessary sequel might inspire. Some of the underwater sites, though dark and murky, would surely be awe-inspiring in real life, and offer an element of fantasy for those of us who have never had the pleasure of such recreational pastime. Also, the notion of sharing this setting with a pack of sharks is also quite terrifying.

When it comes to storytelling, I’m sure you can imagine that things aren’t so great here. Like the first, Roberts teams with Ernest Riera for the screenplay, so the underwater scares are really the focus. Mia and Sasha go to some prim-and-proper all-girls school, and Mia is harshly bullied by her classmates for no conceivable reason. Along with this, Sasha offers her no sympathy or defense, which doesn’t do her character any favors. Having Mia abused at school and recently lost her parents, the film doesn’t really use the opportunity to use her as an emotional anchor.

The sisters’ parents, played by John Corbett and Nia Long, are painfully likable, though they don’t play into this very much. Thankfully, though, Roberts is fully-aware of what viewers show up for, and he makes sure the shark-fueled mayhem is worth the price of admission. It’s the same type of content as July’s alligator-populated Crawl, which was more popular and more critically-praised, but Roberts’ 47 Meters Down films are arguably as good, if not better. Things do admittedly get a little ridiculous in the climax, but what’s a good B-movie without some cheese?