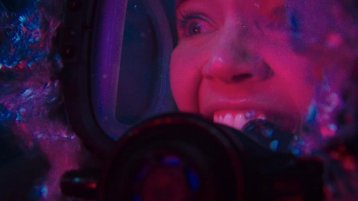 For as far as Jaws rip-offs go, 47 Meters Down is a cut above the norm. The superficial characters and absurd plot contrivances are standard for the genre, but the brave experimentation and effective scare tactics will easily keep viewers out of the water this summer.

47 Meters Down was originally intended for a direct-to-DVD release as In the Deep in August of last year. However, the surprise shark-themed hit The Shallows changed the playing field. Entertainment Studios cunningly bought the rights to the In the Deep, changed its title to 47 Meters Down, and slated it for a theatrical release in the same frame The Shallows had in 2016.

The result has been a triumph of business acumen, garnering 11.5 million in its opening weekend against a budget of only five million. In addition to financial reward, the traditional venue is a major advantage to the film’s presentation, as the close-quarters terrors are served far better in a dark theater than at home in your living room or on your laptop.

At face value, 47 Meters Down is just another run-of-the-mill horror regurgitation. As can be expected, the script rings hollow and the setup is predictable. When it comes to this genre, however, the scares are the main course – and this film delivers. If you have the patience to forgive the frivolous opening act, you’re in for some excitement once the cage hits the water.

Pop singer Mandy Moore and Claire Holt of The Vampire Diaries play Lisa and Kate, two sisters vacationing in Mexico. Lisa tends to be reserved and undemanding in her sources of leisure, so she planned the trip hoping to spice things up with her boyfriend. Unfortunately, she got dumped for being “too boring,” and brought Kate along instead. Kate’s plan is to cheer her sister up by shuttling her to thrilling activities, one of which involves swimming with sharks.

These initial scenes are thoroughly cliched and inane. Mandy Moore’s acting is serviceable, while Claire Holt is off-putting. As we never see so much of a picture of Lisa’s boyfriend, there is no chance of feeling the slightest bit of sympathy for her in her breakup. Kate’s attempts to pull her out of the dumps come off as selfish, as she bullies her into dangerous activities to continue her own reckless behavior.

The scheme that gets the sisters into peril screams mediocre horror, depicting the girls easily agreeing to board a trashy old boat with a handful of shady seamen captained by Matthew Modine. Ignoring all possible reason, Kate convinces a wary Lisa to go scuba diving in the shark cage. If you have the patience to endure this crude 25 minutes or so, this is when the film really begins to hit its stride.

Due to a malfunctioning winch, a cable breaks, and the shark cage plummets to the ocean’s floor, leaving the girls in one of the most terrifying situations conceivable. Mark Silk’s outstanding cinematography enhances the paranoia to a petrifying degree, and it is undeniably impressive how much material director Johannes Roberts is capable of mulling from such a minimalistic premise.

The tiny cage, the immense pressure, and the absence of light and air elicit a crippling claustrophobia. The bulky scuba gear hinders mobility, and there is nowhere for the girls to go. Leaving the cage means exposure to sharks, and ascending to the surface risks the fatal bends. Timing is critical with quickly depleting oxygen stores. An unreliable radio teases the promise of rescue from above, but what if these sailors desert them to avert responsibility?

Roberts makes a wise choice by strategically restraining the usage of his sharks. Sudden, brief appearances of these beasts keep them from wearing out their welcome, and in effect camouflages the limitations of CGI. Much of the plausibility can be debated, but overall 47 Meters Down follows in the footsteps of sharp horror by drawing on atmospherics rather than gimmicks.

Though it is devoid of meaningful character development or storytelling, 47 Meters Down is an agreeable B-movie that makes effective use of its meager budget. It fulfills the primary duty of a horror film, and it evokes scares. It is below the standards of It Comes At Night, but it’s an acceptable diversion if you have a craving for killer sharks this summer.