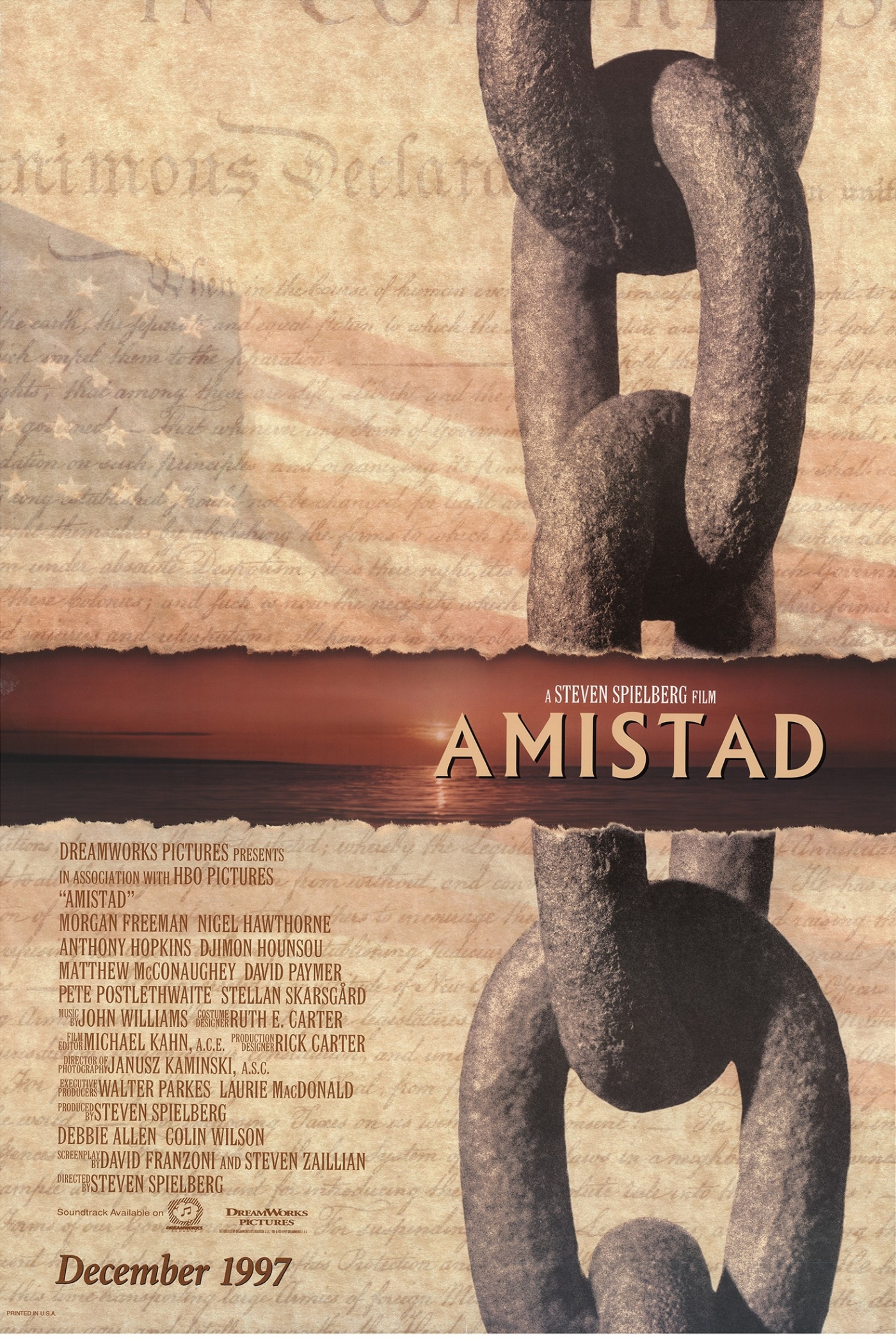 The road to abolishing slavery in the United States was a long and arduous one. The last slaves were freed when the 13th Amendment was passed in 1865, but activists were working to end the practice long before that, including notably in the case of La Amistad in 1841. As part of a series on Film Sentinel, each week we are revisiting a work in the career of Steven Spielberg. This week we’re looking at Amistad: in comparison to Spielberg’s other works, the film isn’t one that is discussed much today, but considering its subject matter, Amistad certainly is a worthwhile one.

In 1839, the schooner La Amistad was transporting 53 slaves from Havana, Cuba when Sengbe Pieh, or popularly known as Joseph Cinqué, broke free of his shackles, freed his fellow slaves, and led a revolt, killing the captain and several others. The ship was then seized in Long Island, New York, and the slaves were incarcerated until the legal system could figure out what to do with them. The case became an important symbol in the U.S. abolitionist movement, and as they were illegally captured in their native Africa, the slaves were freed by the Supreme Court in 1841.

After achieving immense success directing serious content with Schindler’s List in 1993, Spielberg was interested in taking on more projects of social importance, so his next one was Amistad in 1997. David Franzoni wrote the screenplay,  and drew from the work of historian Howard Jones as a reference. Following his incredible feat of directing Jurassic Park and Schindler’s List back-to-back in time for release in 1993, Spielberg attempted to pull off the same stunt again in 1997, with Amistad serving as that year’s awards season-bookend to that summer’s The Lost World.

The film begins focusing on Joseph Cinqué (Djimon Hounsou) as he breaks out of his bonds and leads the slave revolt aboard the Amistad. After the ship’s navigators deceive them into sailing to America, they are soon captured. American abolitionists Lewis Tappan (Stellan Skarsgård) and Theodore Joadson (Morgan Freeman) hire Roger Sherman Baldwin (Matthew McConaughey) to defend the Africans in court. After an initial favorable ruling, the case goes to the Supreme Court, where former president John Adams (Anthony Hopkins) helps win their freedom.

Spielberg famously ventured into serious subject matter for the first time with The Color Purple in 1985. It was a film centering on the struggles of African American women, and as he was a white male director, it was material out of his depth. As a Jew, he had the proper background for Schindler’s List, however, and he crafted one of the most powerful dramas of all time. Now tackling the topic of blackness again in Amistad, Spielberg still lacks perspective as a white man, but considering the film’s strong emphasis on U.S. politics of the 1800s, it’s less of an issue here.

Viewed today, Amistad can be seen as a precursor and relevant experience for Spielberg before directing one of his greatest dramatic works, Lincoln, 15 years later. Both films are historical dramas revolving around politicians and the legality of slavery, with the latter film weighing in as the better work by a wide margin. In Amistad, however, one can see Spielberg’s approach to historical material taking shape, and though he would refine it in the years to come, Amistad still has value in that it brings light to a story that isn’t commonly remembered in discussions today.

And though Spielberg evidently has the best of intentions here, Amistad is inevitably prone to the usual trappings of films of this era in exploring race. As Noah Berlatsky pointed out in a 2014 piece for The Atlantic, this is a classic example of a white savior narrative. And while this is true, it’s also true that this is a portrayal of historical events. I’m open to any discussion of the flaws in the treatment of race in films such as this, but in this case I would prefer to keep things in perspective in that this was one of the most prominent films to tackle slavery at this point.

It’s also worth mentioning that Amistad features the largest gathering of native-born Africans in a Hollywood film by this point in time. Notable among them is the breakout role for Beninese actor Djimon Hounsou, who offers by far the best performance in the film as Joseph Cinqué. His portrayal just radiates the compounded trauma and humiliation subjected to his character, and it’s a fine demonstration of the superb acting chops Hounsou brings to the table, as evidenced in the powerful if-yet-overwrought moment when he loudly pleads “Give us, us free!” in his trial.

Overall, the film sits rather comfortably in an area between The Color Purple and Schindler’s List in that it features Spielberg, attempting to explore racial issues outside of a race of his own, depicting some horrific atrocities, and also padding the film with some of that pesky Spielberg sentiment that trips him up so often in dramatic works. Also included is a rather hackneyed score by John Williams, though with some occasionally chilling choral effects. Williams is often brilliant when working in commercial fare, but his dramatic scores tend to be heavy-handed.

The film tends to pride itself in its presentation of history, and as Amistad is a dramatization, one should take what’s on display here with a grain of salt. Historians have taken issue with some of the depictions, and you should keep the disctinction in mind in how politics of the time tended compartmentalize condemning the transatlantic slave trade while often giving a pass to slavery in general. Also, the film portrays the Amistad case as a step forward toward civil war, but it’s more accurately described as a symbol in the ongoing struggle toward abolition of slavery.

Considering these issues come to a climax in Spielberg’s later film, Lincoln, one could almost view Amistad as existing as part of the same series. This is mainly due to the portrayals of important political figures of the time. Anthony Hopkins submits solid work here as former president John Quincy Adams, at this point in the former president’s career aging and past his prime, but not without important work to do. His monologue before the Supreme Court is a bit protracted and a little too romantic, but I’d place more of the blame here on screenwriter David Franzoni.

Nigel Hawthorne plays a rather villainous President Martin Van Buren, who, while worrying about re-election chances, oversteps authority by meddling with the courts. Let me tell you, there are some parallels here to our current situation. An early Matthew McConaughey is quite good as the lawyer and future politician Roger Sherman Baldwin, and an ever-reliable Morgan Freeman submits fine work as the abolitionist Theodore Joadson. Compelling and informative, while kept in perspective, Amistad can be a useful look at history. But keep it in perspective.

And as always, Black Lives Matter.

Next week we’ll be revisiting one of Spielberg’s greatest directing achievements with 1998’s Saving Private Ryan. The film is on DVD and Blu-Ray, it’s also available for streaming on HBO Max, as well as for rental from digital retailers. Give it a watch, and I’ll see you next week.