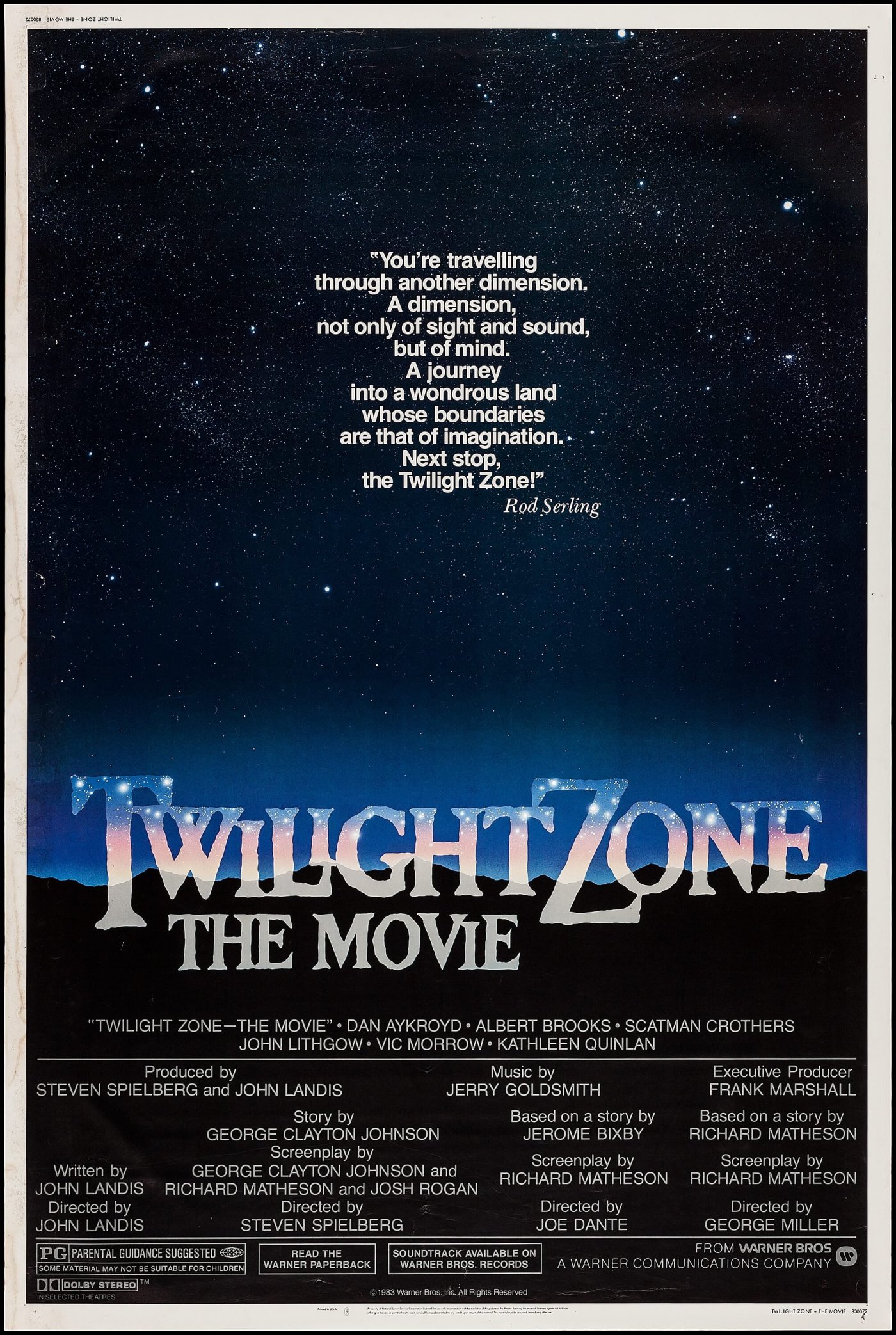 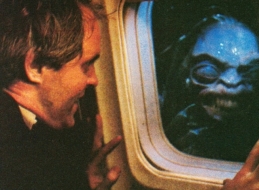 You are about to enter another dimension. A journey into a wondrous land of imagination. Your next stop: Twilight Zone: The Movie! As part of a series on Film Sentinel, each week we are revisiting a work in the career of Steven Spielberg. This week we are examining a film he produced, and directed in part: the collaboration project Twilight Zone: The Movie, an adaptation of the classic CBS anthology series from the 1960s. Twilight Zone: The Movie doesn’t leave the most positive legacy behind, but it is still a worthwhile watch and a fun nostalgia project for fans of the show.

The original Twilight Zone series (1959-1964) is easily one of the most important and influential programs in the history of television. An anthology series consisting of short stories relating to science fiction and the paranormal, and famous for its shocking “twist” endings, many of the show’s plots laid the groundwork of inspiration for series and films to follow. The show tackled everything from ghosts and aliens to more serious subjects such as racism and the Holocaust, and it informed a whole generation of creators leading into Hollywood’s next golden age.

Steven Spielberg, for instance, was coming of age during the original show’s run, and it surely influenced much of his work. Steven even directed a portion of the pilot for the show’s spiritual successor, the Eyes segment in Rod Serling’s Night Gallery in 1969. It’s not surprising then, that at the height of success in the 1980s, that he would favor the idea of producing a film adaptation of the series along with some of his favorite filmmaker buddies at the time. Thus, in 1984 we had Twilight Zone: The Movie, and it didn’t exactly turn out as Spielberg probably would have hoped.

That is partly because of a mixed reception from critics and of fans of the series upon release, but mostly because of a horrific accident that occurred during filming that took the lives of two child actors and star Vic Morrow. More on that later, but it’s not just a terrible tragedy that mars the legacy of The Twilight Zone’s big screen debut, but also of a lack of fresh ideas. The concept of the film is to offer four unrelated plots in similar fashion to the series, preceded by a prologue. Each segment is helmed by a major director of the time, and has an approach of its own.

The first segment, Time Out, is written and directed by John Landis (Animal House, The Blues Brothers), and is preceded by a prologue, Something Scary, also by Landis. The prologue is an appropriate enough introduction, featuring two men, one played by frequent Landis collaborator Dan Aykroyd, the other by Albert Brooks, on a road trip trying to pass the time with conversation. The subject of T.V. shows comes up, and they begin reminiscing about The Twilight Zone. Suddenly, Aykroyd asks Brooks to pull over, turns into a monster, and attacks him.

Okay…? Yeah, not very creative for a twist there. The majority of this bit sets up the film in nostalgic fashion, reminiscing about great episodes such as Time Enough at Last, and offering some functional humor, but the cheesey twist of Aykroyd morphing into some sort of demon-like creature is highly unoriginal. From there, we have some rather goofy-looking CGI images of eyeballs and breaking glass that haven’t aged well as an update on the classic intro proceeds, complete with narration from veteran Zone actor Burgess Meredith, who is a very fitting choice.

Next, the first full segment begins, which is also by John Landis, Time Out. Time Out is a very uncomfortable watch, in one part because of its ugly history in which its star Vic Morrow as well as two child actors died filming in an infamous helicopter accident, but also because of its subject matter: racism. Landis here endeavors to follow in the noble footsteps of classic Twilight Zone episodes Deathshead Revisited and A Quality of Mercy, in which contemptible bigots receive a form of cosmic justice, here with Vic Morrow starring as the racist of the film iteration.

Morrow here is Bill, a man who is furious that a “Jew” was favored over him for a promotion. After leaving a bar one evening, he is suddently thrust into several situations: as a Jew in Nazi Germany, an African-American at the hands of the KKK, and as a Vietnamese in the Vietnam War. An indictment against racism is always a laudable intention, and it’s always a nice fantasy to see a bigot get his “just desserts,” but like the segments after, Time Out suffers in comparison to its source material. It’s also a strange choice to start what should be a fun movie overall.

Next is Spielberg’s segment, the reenactment of the 1962 episode Kick the Can, which was originally written by George Clayton Johnson, and is co-written in the film version by Spielberg alums Richard Matheson (who wrote Duel as well as several classic Zone episodes) and his daughter Melissa Matheson (who wrote E.T. for Steven). The theme of Kick the Can is holding on to your youthfulness, even in old age. It’s about a group of seniors in a nursing home who go outside one evening to play “kick the can” for old time’s sake, and find themselves children again.

It’s an aggressively sweet and charming story, so it’s only natural that Steven, who is famous for sentiment, would opt to helm this one. In fact, it’s too much so, as the score by Jerry Goldsmith really puts it over the edge. Where the remake differs from the original, is that the “magic” comes from a new senior resident (delightfully played by Scatman Crothers of The Shining) who travels around sharing the gift of youthfulness. It also ends on a more optimistic note, with the sole curmudgeon who missed his chance still having an opportunity at becoming young too.

The segments appear to be laid out from worst to best, as each one gets better than the last. Next is the remake of the 1961 episode It’s a Good Life, which was written by Rod Serling and based on a short story by Jerome Bixby, and is adapted here by Richard Matheson. It’s directed by Joe Dante (Piranha, Gremlins), and is about Anthony (Jeremy Licht), a young boy with godlike powers who wills a traveling schoolteacher named Helen (Kathleen Quinlan) to come to his home to visit his “family.” At the house, she witnesses a very bizarre scene, as Anthony is a true nightmare.

This portion is quite memorable for its impressive animatronic practical effects, which include an evil giant rabbit and a real-life Tasmanian Devil, among others. The trademark Joe Dante mischief really makes an impression here, proving the director an appropriate choice for the segment’s black humor, and providing the episode a fun update. However, the original was certainly darker and more shocking, with the apocalyptic element having been removed here. It does end in an interesting place, with Helen wanting to team up with the boy as his teacher.

And last is the grand finale: the only remake that improves on the original, George Miller’s update on the 1963 episode Nightmare at 20,000 Feet, which was originally written by Richard Matheson, who adapts it here as well. It involves an extremely anxious flier (John Lithgow) seeing a creature attacking the wing of his plane outside his window. The special effects for the monster in the original episode were famously bad, looking more like a man in a teddy bear suit, and the film version improves on them in a big way, with a terrifying, reptilian looking creature.

George Miller, famous for directing the Mad Max franchise, some of the best action work put to film – brings his full chops to the intensity here. The segment is overflowing with tension and chaos, and is fully capable of eliciting the same panic from the audience that Lithgow portrays so remarkably in his character. And then that’s it. A rather mixed bag of highs and lows, offering mostly subpar remakes in tribute to a classic television series without offering much in the way of new ideas. For fans of the show, there is fun to be had here. For all others, start with the series.

Next week, we’ll be revisiting the Indiana Jones franchise with 1984’s much darker sequel The Temple of Doom. It’s available on DVD and Blu-Ray, for streaming on Netflix, as well as for digital rental. You can read the review for Raiders here. Give it a watch, and I’ll see you next week.

Prologue: Something Scary, Time Out, and Epilogue: Even Scarier directed by John Landis.

Kick the Can directed by Steven Spielberg.

Prologue: Something Scary, Time Out, and Epilogue: Even Scarier written by John Landis.

One thought on “Twilight Zone: The Movie Review – Series Spielberg #09”