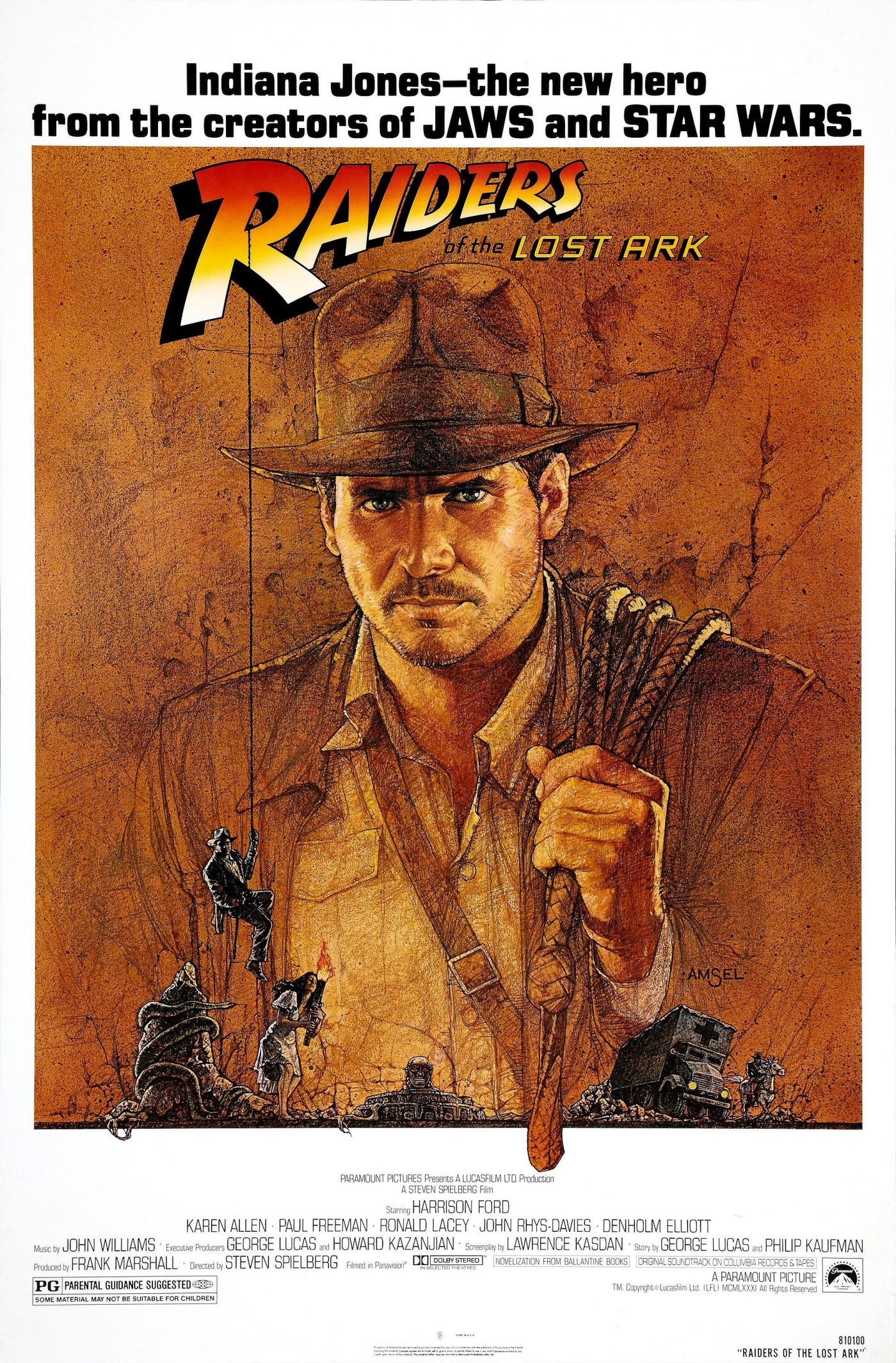 Hold on to your hat: this week on Film Sentinel, we’re excavating the ultimate adventure film, the escapist masterpiece Raiders of the Lost Ark for re-discovery. As part of a series on Film Sentinel, we’re examining a work in the career of Steven Spielberg each week, and Raiders is one of his very best. Absolutely filled to the brim with exhilarating set pieces, unpredictable moments, clever humor, and unforgettable characters, the first installment of the Indiana Jones franchise stands today as one of the most iconic and enduring works of American cinema.

The people behind the creation of Raiders were top men. Top men. George Lucas, who you might know from a little series called Star Wars, created the character to go along with his space opera to furnish what he considered “modern” fairy tales. Indiana was to be a larger-than-life adventurer with a whip inspired by the serial films of the 1930s and 40s. In 1977, while Lucas and Spielberg were both vacationing in Hawaii, Steven expressed his interest in directing a James Bond film. Lucas told him: “I’ve got something better,” and by 1980, Steven was directing Raiders.

In 1978, in between the periods that Lucas was working on The Empire Strikes Back and Spielberg was working on 1941, they both collaborated to develop ideas for the story, while Lawrence Kasdan, who was also writing Empire, wrote the script. After the release and negative reception to 1941, Spielberg was discouraged, and needed another hit to get his career and reputation back on track. Raiders did exactly that for Steven. Taking lessons from 1941 and his previous films, he focused in and took his work on Raiders very seriously, and it was an enormous success for him.

You all know the story, but who doesn’t love hearing it again? Indiana Jones (Harrison Ford) is a globe-trotting treasure hunter and professor of archeology at Marshall College in 1936 when he is recruited by the army to locate the famed Ark of the Covenant before the Nazis do. He is joined by Marion Ravenwood (Karen Allen), old flame and daughter of his late mentor , who possesses an ancient headpiece Indy needs. After many struggles back-and-forth with the Nazis, Indy and his friends recover the Ark, but not before the Nazis open it and are obliterated by its power.

With such effective execution and immense influence, Raiders of the Lost Ark reigns today as the uncontested greatest action-adventure film of all time. It’s also a strong contender for greatest action film in general, but with a little movie known as Mad Max: Fury Road out there, that throne was seized in 2015. Its title in the action-adventure realm, however, still bears no competition whatsoever. It all represents Spielberg’s virtuosic mastery over popular film, and Raiders functions as a perfectly distilled demonstration of this from which academics can peruse.

Raiders was followed up by three sequels and a prequel television series, and all would be good if not great, but none would live up to the extraordinary precision with which the original was produced. Much of this is thanks to its marvelously conceived set pieces on behalf of Spielberg and his writers, as well as on the part of Steven’s masterly editor Michael Kahn. Many scenes are not even essential or necessary for the overall plot, but work together as part of a comprehensive aesthetic and a consistent sensory package that both contribute to the film’s fluid efficacy.

The first one is arguably the most famous of all: the infiltration of the ancient temple in Peru (complete with Alfred Molina in his first film appearance). The spikes that shoot out of the wall, the poison darts, and the tarantulas are all great, leading up to the classic visual of Indy switching out the golden idol with a bag of sand. The weight isn’t right, however, and the temple begins to crumble; as Indy gets across a chasm, barely snatches his hat from under a closing wall, and is chased by a giant boulder in one of the most iconic sequences in the history of film.

And that’s only the opening scene. From there, we have an epic brawl in the bar in Nepal as it burns to the ground, and a chase throughout the streets of Cairo before the resting place of the Ark is exhumed, which is complete with dead bodies and a sea of thousands of snakes, which Indy has a phobia of. Once the Ark is found, we have a boxing match with a huge burly Nazi next to a flying wing, followed by one of the most exciting scenes with a fast-paced truck chase, all leading up to the terrifying finale in which the Ark is opened, complete with exploding heads.

Spielberg’s direction contributes greatly to the film’s success, but we also need to acknowledge the rugged charisma and the everlasting charm of Harrison Ford’s Indy, who is unquestionably one of the most famous characters in cinema. Just his silhouette alone is instantly recognizable, as the scene in the Nepal bar shows. This is also thanks to the brilliance of costume designer Deborah Nadoolman, who worked with Harrison to achieve a look that was at once unique, everyman, and practical with his signature outfit involving the worn fedora and leather jacket.

Karen Allen, who was cast after Spielberg saw her in Animal House, is a feisty firebrand of a co-star, and is a perfect match for Indy and more than up for his dangerous exploits. Allen is loud, fierce, and alluring, and she adds some kick to the film’s flavor. John Rhys-Davies and his deep baritone voice and brotherly bravado make a choice right-hand man for Indy as “the best digger in Egypt.” Paul Freeman brings class and mystique as Jones’s rival René Belloq, and Ronald Lacey is expert at making your skin crawl as the chilling and sadistic Nazi Gestapo Major Arnold Toht.

Prior to this film, Steven had amassed a reputation of going over budget and over schedule with his productions. Lucas had a difficult time getting a studio to back the film due to his demanding negotiating conditions, and as a way of making Paramount have more confidence they agreed to do the film “quick and dirty” to save on costs, and also to help give the film a roughshod look similar to the serial films it was inspired by. Due to this, Steven afforded more control to a second unit director for the first time, furthering his own maturation as a filmmaker.

You may have noticed that a couple of words have popped up in this review more than once, those being “famous” and “iconic.” And that’s only logical, because nearly every element of Raiders of the Lost Ark is famous and iconic. From John Williams’ terrific score including the quintessential Raiders march, right down to the set props and wardrobe. It follows then that Indiana Jones has had a profound impact and influence on subsequent cinema, and it’s all thanks to the remarkable vision of all involved. For any lover of cinema, Raiders is mandatory viewing.

We’ll get back to Indiana Jones soon enough, but next up on Series Spielberg is the horror classic Poltergeist. It’s available on DVD and Blu-Ray, as well as for digital rental from YouTube, iTunes, Google Play, Amazon Prime and Vudu. Give the movie a watch, and I’ll see you next week.

RAIDERS OF THE LOST ARK