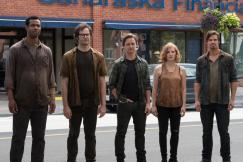 It’s not over till It’s over. It Chapter Two, that is. The hotly anticipated sequel to the most successful horror film of all time has finally arrived, and though it didn’t quite match the original’s record-shattering $123 million opening, $91 million is nothing to sneeze at. It Chapter Two still boasts the second-largest box office opening of all time for a horror film, and a lack of competition suggests a promising run ahead. With pitch-perfect casting and bigger scares, fans are sure to be pleased, but an indulgent run time and sloppier execution threaten to throw Chapter Two off course.

It goes without saying that no novelist has had as strong an impact on cinema as Stephen King, with many of his works such as Carrie and The Shining being adapted to film over the years. Television is another medium that has been a home to many of King’s adaptations, and in 1990, one of his most popular novels was first brought to life. Directed by Tommy Lee Wallace, It wasn’t as acclaimed as some of King’s films, but the mini-series was still a hit with fans, with much of the praise being directed to Tim Curry’s performance as Pennywise the Dancing Clown.

Then in 2017, It was remade as a film, with modern special effects and higher production values affording Pennywise a much more worthy treatment than Wallace’s mini-series was able to provide. The film was directed by Andy Muschietti, who made a strong impression with 2013’s Mama, but demonstrated his lack of experience in It with some choppy direction and lackluster dramatic choices. But with inspired casting and some solid scares, Muschietti’s adaptation easily bested Wallace’s. However, 2017’s film only covered the first half of King’s sprawling story.

While both King’s original novel and the 1990 mini-series alternated between timelines that featured the characters as either children or adults, 2017’s film covered only the childhood portion of the story, saving the adult portion for 2019’s Chapter Two. The sequel features each member of the “Losers Club” 27 years later and all grown-up, being faced with keeping good on their childhood promise of returning to Derry if the presumed-defeated shapeshifting monster most-commonly-known as Pennywise the Dancing Clown (Bill Skarsgård) ever returned.

In 2016 the unthinkable happens, and the mysterious force begins once again feasting on the local residents of Derry to feed his appetite for fear. Mike Hanlon (Isaiah Mustafa) never left Derry, and has spent his life obsessing on how to defeat the clown. When it’s clear Pennywise has returned, Mike makes calls to each of his childhood friends, all of whom but one return to honor their pact. Once back, each member of the Losers Club sees their childhood trauma rushing back all at once, as they grapple with how to put an end to the deadly clown’s reign once and for all.

Clocking in at a hefty 169 minutes, and with a scale of mammoth proportions, It Chapter Two may be the very first horror film to truly earn the term “epic.” Everything is bigger: the scares, the stakes, the action, and yes, the blood. In fact, according to Jessica Chastain, a certain scene contains the largest amount of fake blood ever used in a horror movie. With a budget between $60 and $80 million, it’s clear that no expense has been spared. And as with many sequels of considerable hype, It’s producers clearly show little regard for a sense of reasonable moderation.

The faithful are likely to see this commitment on the part of the studio as a dream come true, but the more seasoned filmgoer is likely to see this for what it is: an exercise in excess. As a textbook example of a bloated sequel, Chapter Two‘s execution leaves a lot to be desired, though I would be lying if I were to tell you that the film wasn’t a hair-raising bloody thrill ride. The road to get there is bumpy one, but the finish line promises an exceptionally satisfying conclusion to this saga, and that is largely due to the outstanding casting of both the child and adult actors.

The pre-pubescent roster of the Loser’s Club boasted an excellent foundation, and the stars of Chapter Two don’t disappoint in the opportunity to offer their characters a level of maturity their childhood counterparts weren’t capable of. James McAvoy leads the pack as Bill Denbrough, competently capturing his grief and stuttering insecurity. Jessica Chastain, a proven Hollywood force and a returning collaborator of Muschietti’s, perfectly fits Beverly Marsh in likeness and essence. But the most startlingly impressive work here comes from Bill Hader as Richie Tozier.

As the adult incarnation of the foul-mouthed wiseguy, Hader delivers the character’s sizzling one-liners with ease, but you will most likely be surprised to find Hader is the most emotionally vulnerable of the whole group. Hader’s Richie suggests a lifetime of sarcasm and ridicule to mask his childhood trauma boiling under the surface, and perhaps even a suppressed sexual identity. This is the best performance of the film by far. Jay Ryan, Isaiah Mustafa, James Ransome and Andy Bean all impress as well as the remaining members of the Losers Club.

And of course, we can’t ignore Bill Skarsgård as Pennywise. What a master of unease. You’re sure to never forget that disturbing cackle, nor that twisted grin. Where Tim Curry’s Pennywise leaned more towards amusing as a deranged maniac, Skarsgård truly brings the clown a sense of bone-chilling terror. It follows that it’s a bit of a shame, then, that Muschietti has gravitated so strongly in this series, and especially in Chapter Two, toward chaotic set pieces and CGI monsters for scares, and it’s obvious here that the man isn’t a believer in the principle “less is more.”

As a part of this sequel’s inflated length and total lack of restraint, an unwieldy midsection laboriously follows each returning member of the Losers Club as they revisit a location of their youth, are reminded of a childhood memory of being terrorized by Pennywise, and are subsequently terrorized by Pennywise again. Not including Mike, this is five characters essentially giving us a tour of 10 horror set pieces. Muschietti’s refusal to edit this down is just gratuitous. If you’re not a fan of horror or gross-out gags, you might want to sit this one out.

But if you’re willing to sit through Chapter Two‘s prolonged tour of trauma, you’re in for a third act that is an explosive and walloping bombshell of thrills. It’s all completely over the top, but it brings things to an end in unforgettable fashion. And if you loved the kids from the first film, don’t worry, they make plenty of appearances in periodic flashbacks, although they only really serve for Muschietti to engage in some shameless romanticized nostalgia. Bigger, badder, and immensely flawed, It Chapter Two is reckless and artless, but is still sure to keep fans floating.

Written by Gary Dauberman, based on It by Stephen King.