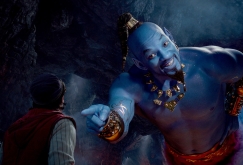 Whether you asked for it or not, your wish has been granted: Aladdin has been remade. As part of Disney’s current phase of rebooting classic animated works to live action, the beloved 1992 film is the latest to be updated into a special effects extravaganza tailored to serve the masses. Similar to Bill Condon’s Beauty and the Beast from 2017, Guy Ritchie’s Aladdin religiously adheres to the film it’s based on, with minor updates here and there. While this isn’t the worst of Disney’s reboots, you’re still far better off watching the animated original, as this Aladdin is passable at best.

Released in 1992, Disney’s animated Aladdin was one of the seminal works of the “Disney Renaissance,” an era in the studio’s history where creative inspiration was met with mainstream adoration following a period of both critical and financial floundering between the 1970s and 80s. Based on the iconic folktale that was added to The Book of One Thousand and One Nights in the 18th century by Frenchman Antoine Galland, Aladdin was a richly animated work of fantasy that was lavish with enchanting musical numbers, and imbued with some daunting darker elements.

In this reboot, Mena Massoud (appearing before here in TV’s Open Heart, Jack Ryan) plays Aladdin, a “street rat” who lives among the rooftops of the Arabian city Agrabah, and survives poverty by stealing food and valuables with his monkey Abu (Frank Welker, reprising his role from the original). In the marketplace, he defends a young girl after she is caught by one of the palace guards “stealing” an apple. What he doesn’t know is that this girl is the wealthy princess Jasmine (Naomi Scott, TV’s Terra Nova) who is in disguise to get away from the palace for a while.

Meanwhile, the evil sorcerer Jafar (Marwan Kenzari) is searching for a “diamond in the rough” who can enter the mystical Cave of Wonders to retrieve a magic lamp. After Jafar identifies this figure as Aladdin, he spots him sneaking around the palace trying to reconnect with Jasmine, and hatches a scheme to recruit him into fetching the lamp. Jafar tries to double-cross Aladdin by trapping him in the Cave of Wonders, but thankfully, Abu manages to save the lamp, which reveals an all-powerful genie (Will Smith) who is bound to granting his master three wishes.

Mena Massoud certainly is likable, and he makes for a serviceable Aladdin, but there is only so much he can do with a utilitarian script that overtly romanticizes its source material. As a singer, he’s so-so. Naomi Scott, on the other hand, steals the show as princess Jasmine, as she boasts the most confident singing voice by a wide margin, and belts out some impressive vocals during the one new musical addition “Speechless.” As far as her standard acting goes, she’s on about the same line as Mena Massoud. And then there’s Will Smith as that iconic buoyant blue genie.

For a character with no feet, Smith has some enormous shoes to fill when it comes to taking the torch of the legacy of the incredibly talented Robin Williams. Let’s be clear here: Williams was Genie, and without his unforgettable improvisational voice work, we would have no conception of the character Smith is obviously trying to emulate in this film. That being said, Smith makes a certainly admirable hack at it: the actor fits the character quite well in physical appearance, and his take on the spritely blue jinn registers as the most enjoyable portions of the film for sure.

Conversely, the casting of Marwan Kenzari as the villain Jafar smacks as the worst production choice in the film by a mile. Kenzari, a little-known Dutch actor who has appeared before here in the Netflix film What Happened to Monday as well as the 2016 remake of Ben-Hur, stings as a completely misguided choice to portray the famous sorcerer. The Jafar of the 1992 original, voiced unnervingly by Jonathan Freeman, was a slimey, pernicious figure. In contrast, Kenzari is very young, and lacks any sense of intimidation, and his casting director is most likely to blame.

Directed by Guy Ritchie, Aladdin is much more the product of a corporation than the result of any one person’s vision, and that is perhaps to the film’s benefit, as Ritchie isn’t the greatest filmmaker in the world. Known for 2000’s Snatch as well as the Robert Downey Jr.-led Sherlock Holmes, Ritchie struck out hard in 2017 with his critical misfire and box office bomb King Arthur: Legend of the Sword. Ritchie was chosen by Disney in 2016 before that horrendous mess was released, and it’s a wonder he wasn’t let go after exemplifying such a poor handling of fantasy.

Thankfully for the House of Mouse, things aren’t quite as bad here, as the probable strong mandates from the director’s superiors temper his worst inclinations, and we don’t see his recent signature involving manic, muddled plot exposition. In its stead we see heavily restrained creative output moderated by a marketing strategy bent on recapturing the magic of 2017’s Beauty and the Beast. This live action Aladdin isn’t as bad as some had feared, but with indulgent production values and too little separation from its source material, I’d stick to the original.

Written by  John August and Guy Ritchie, based on Disney’s Aladdin
by Ron Clements, John Musker, Ted Elliott, and Terry Rossio; and Aladdin and the Magic Lamp from One Thousand and One Nights.