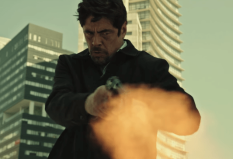 If there is a movie that doesn’t need a sequel, it’s Sicario. As a hard-hitting action/drama with an alarming depiction of the Mexican drug war, the film works perfectly in self-containment. The original was no blockbuster, but with an $85 million global haul against a budget of only $35 million, Lionsgate saw fit to approach the crew for a sequel. Without the virtuosic director of the original, the result features a rather unsurprising, plummeting drop in quality. But with the adept Taylor Sheridan still on board as screenwriter, Day of the Soldado still demands attention.

The first Sicario from 2015 is a bona fide masterpiece. With widespread critical acclaim and three Oscar nominations, the film is still woefully underrated. The script was the first from Taylor Sheridan – known first for playing a cop on Sons of Anarchy, then transitioning to film to floor critics with his first screenplay in Sicario, later getting an Oscar nomination for Hell or High Water, and stepping up to the director’s chair for last year’s Wind River. With startling, eye-opening portrayals of police tactics below the Mexican border, Sicario was shocking and relevant.

More than this, it featured one of the most proficient directors working today at the top of his game. Denis Villeneuve, who previously helmed Incendies and Prisoners, and would go on to bless us with the science fiction films Arrival and Blade Runner 2049, managed to present cinematic normalities such as explosions and gunfire in a gripping, realistic fashion. The original film also boasted cinematography from the renown Roger Deakins, who decisively heightened the stakes with arresting aerial shots that established the far-reaching consequences of cartel crime.

With Villeneuve gone, Italian director Stefano Sollima swoops in to make his debut in the States. Sollima offers a resume flush with applicable experience with past opportunities such as the Italian crime films ACAB – All Cops Are Bastards and Suburra,  as well as the mob series Romanzo criminale – La serie (Crime Novel – The Series). With such similar work under his belt, Sollima deftly imitates much of the intensity and gravitas Villeneuve originally demonstrated. But alas, he just isn’t the same, and falters especially when it comes to pacing and maintaining tension.

Day of the Soldado lacks not only Villeneuve and Deakins, but the star of the previous film, Emily Blunt. Blunt’s character, Kate, functioned as the audience surrogate, placing judgment on the methods of the American agents. Kate made it clear at the end of the film that she wanted no part of the activity going on south of the border, so naturally, if the story is to continue, she doesn’t really have a place in Day of the Soldado. It follows that her absence has little negative effect on the sequel, though the political subtext takes a backseat to the action and upright brutality.

Sicario’s title comes from the Spanish term for a hitman working for one of the massive drug cartels. Alejandro Gillick (Benicio del Toro) is a sicario who works for the Columbian cartel Medellín, but frequently teams up with Matt Graver (Josh Brolin), a high-level American operative. Alejandro may not have been the primary focus of the first film, but he took charge in the third act as he went rogue to slay the vile kingpin who laid waste to his wife and daughter when he was still a lawyer. In Day of the Soldado, the hitman fittingly seizes the spotlight.

Del Toro proffered a dedicated performance as a ruthless, yet anguished renegade in the original Sicario, and it’s a pleasure to see him capitalize on the character further here. Alejandro’s arc was effectively satisfied with the assassination of Díaz, but that gets extended in the sequel as we learn that the cartel boss killed Alejandro’s family while in the employment of Carlos Reyes, Graver’s target in this film. Because of this, we have reason to revisit Alejandro as he teams up with the Americans again as they proceed to set him loose to wreak bloody vengeance.

The film is an anarchic delight as Graver plans to pit two rival cartels against each other by staging the kidnapping of Reyes’ daughter Isabela (Isabela Moner of Transformers in stronger material), and Sheridan embeds similar political condemnation as the task force devolves into a gang of mercenaries when they resort to murdering the Mexican police. However, the sequel is harshly redundant, and the film is largely a by-the-numbers exercise in futility. The stronger focus on action enhances the escapism, but the work as a whole is utterly unnecessary.

Though the previous Sicario featured fictional crime rings and stand-in mob bosses, they were still applicable enough to the real world to feel frighteningly accurate and informative. Here, however, Sheridan utilizes people and events that are wholly fictitious. For instance, Matthew Modine portrays Secretary of Defense “James Riley,” and cartels are pictured trafficking Islamic terrorists over the U.S.-Mexico border. These inclusions aren’t based on fact, and serve more to furnish mindless entertainment than to add substantive commentary to real-world conflict.

It’s also important to note that Day of the Soldado happens to arrive exactly as the debate over immigration is at an all-time high, and is capable of muddying the waters just as legislators are pondering revising a deeply flawed system. The material here can give conservatives more fire to incite undue outrage toward foreigners, but it is also a crucial lesson for liberals who tend to forget that some of those crossing the border truly are bringing some noxious crime. The timing is both relevant and inopportune, and hopefully Sicario will educate more than it misleads.

SICARIO: DAY OF THE SOLDADO