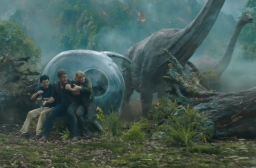 By any reasonable standard, the Jurassic Park franchise should be long extinct by now. After the mixed reactions to Jurassic Park III, the proverbial asteroid appeared to have hit the series. But like Dr. Wu and the fossilized mosquito, Universal has tapped the amber once again to present another terrifying clone to the masses. J.A. Bayona’s fresh sequel follows the Jurassic Park tradition of offering state-of-the-art special effects and riveting action, but also another rehash of the original’s haunting themes. Fallen Kingdom has no reason to succeed, but life has found a way once again.

In 1993, Steven Spielberg made cinematic history (again) by delivering one of the most beloved and iconic films of all time. The original Jurassic Park was not only a pivotal showcase for the capabilities of CGI at that point in time, but a powerful science fiction cautionary tale examining concepts of evolution and human arrogance. With The Lost World and every sequel to follow, the series has continued to deliver awe-inducing CG visuals, but with varying levels of genuine excitement, and all while beating the dead horse of the original’s messaging to ad nauseum.

Starting with The Lost World, every Jurassic sequel has proven there is little ground Spielberg’s seminal classic didn’t effectively cover, but most of the films have been unforgettable popcorn thrillers nonetheless. As part of the current Hollywood trend of exploiting nostalgia, Colin Trevorrow’s Jurassic World essentially rekindled the original’s concept for the 21st century. Though he forfeited directing duties for Fallen Kingdom to J.A. Bayona, Trevorrow stayed on as screenwriter, and followed suit by virtually remaking Spielberg’s The Lost World, warts and all.

Your enjoyment of Fallen Kingdom will likely hinge on your mileage in your ability to still maintain a sense of wonder after having seen giant reptiles in the four previous Jurassic films, not to mention living nearly thirty years into the digital age. There’s just no shock to seeing a dinosaur anymore, the previous film even had sly nod to this (“These days, kids look at a Stegosaurus like an elephant from the city zoo”). But if you’re like me, there’s still childlike glee to be had at the sight of the mighty Tyrannosaurus thunderously stomping through the jungle.

The first Jurassic World revealed that InGen Technologies built a newer, more modern version of the Jurassic Park that broke down and… this one broke down as well. In Fallen Kingdom, the site of the former park, the fictional Central American island of Isla Nublar, is about to have a major volcanic eruption, and former operations manager of the park, Claire (Bryce Dallas Howard) is determined to lead a team of activists to rescue some of the species from extinction. After recruiting former raptor trainer Owen (Chris Pratt), the crew sets out to save some dinos.

The inherent weakness to the storyline here is that it is practically identical to that of The Lost World. The only difference is that the mission this time around is one of rescue, whereas before it was one of research. While there is a profound lack of originality in approach here, the more problematic issue is that history is repeating itself, as the conceptual misguidance that plagued The Lost World plagues Fallen Kingdom to an even worse degree. Just as before, the early portions are packed with thrills, but once off the island, the third act puts a harsh slam on the brakes.

Another ill-advised element to Trevorrow’s script is a troubling endorsement of the humane treatment of animals at the expense of human safety. On more than one occasion, the pained sympathy for the reptiles favors freeing them from confinement while people are close and vulnerable. The climax comes close to reversing this with a statement that shows the filmmakers have their values straight, but this is ultimately undermined by the eventual outcome. In the end, it all serves to again demonstrate Jurassic‘s routine mantra of life’s reckless power.

Also, an irritating question that dogs the viewing experience is why the eruption on Isla Nublar would be so devastating. Would dinosaurs really be extinct? Couldn’t you just… clone more dinosaurs? Thankfully, despite flaws at the conceptual level, the film boasts an assured director in J.A. Bayona, who garnered acclaim with his previous disaster picture The Impossible, and crafted an emotionally consuming fantasy in last year’s A Monster Calls, and he mostly retains his ability to oversee the output of a smooth end product here, despite the larger scale in production.

Returning cast member Chris Pratt hasn’t lost his lovable balance between playful charm and rugged charisma, and he still strikes a delightful chemistry with Bryce Dallas Howard. Series newcomer Rafe Spall on the other hand, furnishes a cartoonish villain as the secret puppet master behind InGen’s shady motives, aided by a similarly two-dimensional Dr. Wu from Jurassic veteran B.D. Wong. Also, I’m disappointed to report that Jeff Goldblum’s involvement teased in the trailers is mostly limited to a cameo. And sadly, Sam Neill is still retired from the franchise.

But despite a myriad of problems, Fallen Kingdom delivers some of the most pulse-pounding, thrilling, elating action sequences seen in cinema in recent memory, mainly thanks to Bayona. And since this is the core of what most fans of Jurassic Park love about the franchise, I have to recommend it, even if it’s against my better judgment. Sure, we’ve seen all of this before, and the third act is a drag, but the searing rush you’ll get from the volcanic eruption is well worth the price of admission alone. It might be riddled with error, but Fallen Kingdom is still exhilarating.