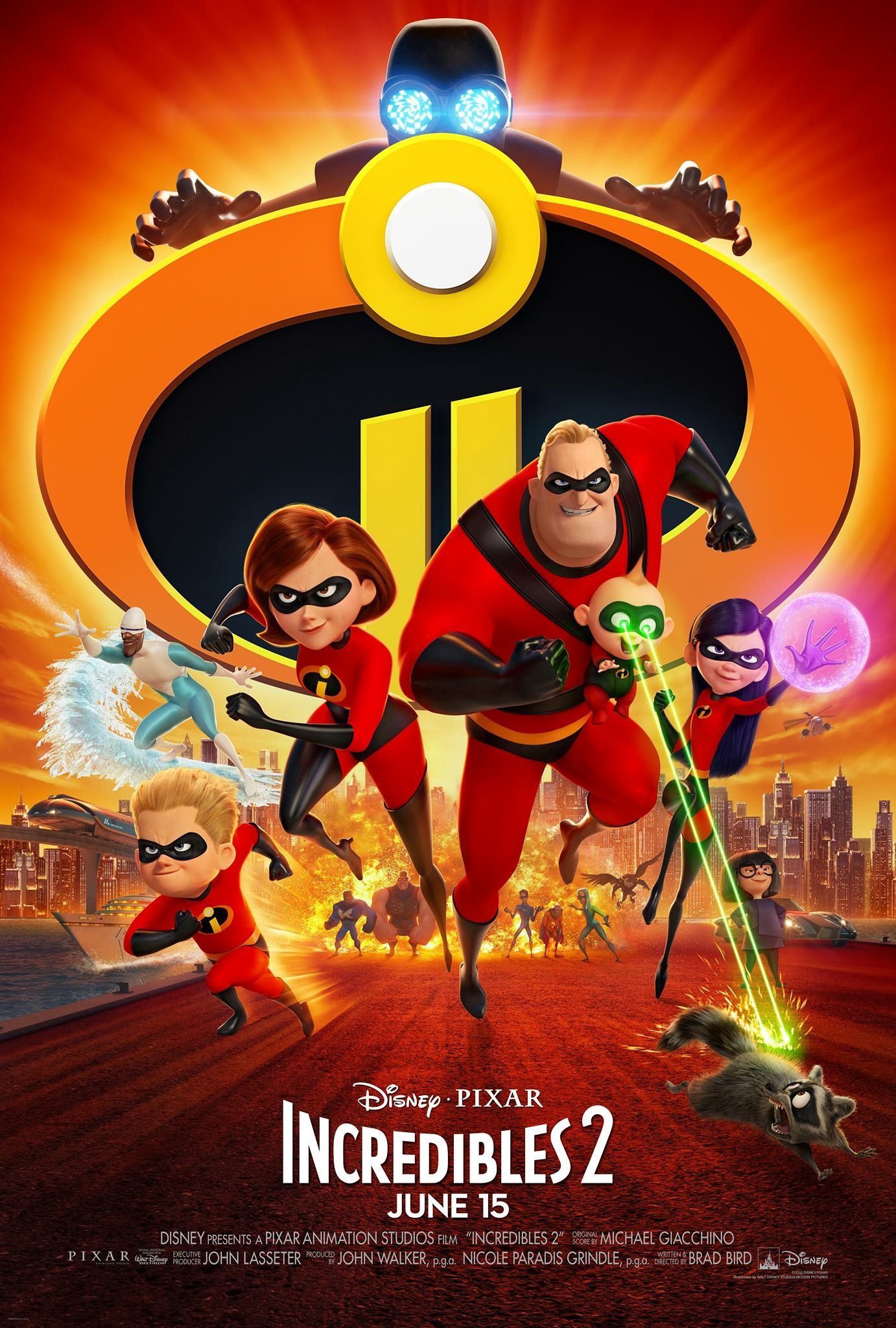 After 14 long years, the Incredibles sequel has finally arrived. A large portion of millennials who were growing up during the period the first film was produced have children of their own now, and those fans are sure to tear up the box office this weekend as parents and kids clamor to revisit the quintessential superhero family. If you’re familiar with the long-delayed Pixar sequels Monsters University and Finding Dory, that should give you a strong idea of what to expect from Incredibles 2 – declining innovation and diminishing returns, but easily a satisfying film overall.

The landscape of film has drastically changed in the years since the original Incredibles was unveiled. Superheroes were certainly around in 2004 with hit-or-miss adaptations such as Fantastic 4 and X-Men, but they had yet to experience their explosion in popularity, and Marvel Studios didn’t even exist. Works like The Dark Knight and The Avengers would go on to unforgettably demonstrate what superhero movies could be, but one thing still hasn’t changed: the first Incredibles is still an ingenious work of film, and that legacy hasn’t been tarnished.

In fact, I would go as far as to say that The Incredibles is one of the greatest animated films of all time, arising during Pixar’s peak in creative prowess. Director Brad Bird and company brilliantly utilized the medium of animation to comically riff on tropes of Saturday morning fare, while simultaneously raising the emotional stakes and rendering a villain capable of genuine cruelty. More than this, Bird’s film amusingly extended stereotypes of standard family roles to dovetail into their respective superpowers, and it was all presented in a sleek, boldly stylized package.

Given the towering prestige of the original film, Incredibles 2 faces a daunting charge: to match the same degree of invention and dexterity of its predecessor, and also to deliver a rousing family adventure. This mostly mimics the task that Monsters University and Finding Dory were up against, and Incredibles 2 continues Pixar’s current trend of cheapening the studio’s lofty heritage, though still producing agreeable, worthwhile content. One may wish Pixar would adhere to crafting original gems such as Inside Out and Coco, but sub-par sequels are certainly better than nothing.

If you’ve been wondering what the Parr family has been up to all these years, don’t worry, you haven’t missed anything. In fact, Incredibles 2 picks up exactly where the original left off, on the heels of the Underminer’s (Pixar regular John Ratzenberger) brash introduction. Thankfully, the team didn’t choose to have the Parr family age in real time, as this would have robbed the premise of the very thing making it unique, that of delving into everyday family dynamics when super powers are added to the equation. Surprisingly, there’s plenty the first left unexplored.

Remember Tony Rydinger (Michael Bird), Violet’s (Sarah Vowell) crush from the first movie? Well, their movie date didn’t go exactly as planned, and Bob (Craig T. Nelson) is about to experience the full power of teenage girl angst (God help him). Also, remember when baby Jack-Jack realized his powers in the first movie? Bob discovers his baby’s gifts for the first time here, and he certainly has his hands full with a toddler who bursts into flames, crosses dimensions, morphs into an angry demon… the list goes on. Meanwhile, Helen (Holly Hunter) has a new job.

Helen sees her big break here by serving in a PR scheme designed to bring superheroes back into the public’s favor to spurn new legislation. The plan is devised by Winston Deaver (Bob Odenkirk), a telecommunications tycoon and superhero fanboy, in conjunction with his sister Evelyn (Catherine Keener), who fancies herself the genius behind the scenes. The film’s tension emerges out of a storytelling approach that heavily evokes the broader concept of the original, and disappoints as fairly unsurprising. In addition, the villain’s reveal is painfully predictable.

In a reversal of roles from the previous movie, Elastigirl gets contacted for hero work, while Bob gets stuck home juggling the kids as a stay-at-home dad. While the opportunity for Helen to do the heavy lifting mainly feels like a retread of Bob’s plight in the original, Mr. Incredible’s challenges meeting the demands of domestic life offers a surfeit of new material drawing on the family angle, and leads to a treasure trove of side-splitting gags and situations as Bob repeatedly falls flat on his face struggling to control his reckless infant and maintain order in his home.

Though the trouble on the home front is the main supplier of this sequel’s level of fun, 2 tends to be a bit of a drag as it hones in on more of the politics of superhero legality than in the first film. As Helen lectures her children on the lack of justice in a superhero-restricted world, Dashiell (Huck Milner) nervously asks “are things… bad?” This query resonates as disconcertingly relevant in our current climate, and families should be able to do without it in an outing that is supposed to be about having a good time. The efforts shouldn’t go unnoticed, however.

But while the woes of modern America have found a way to infect even The Incredibles, Pixar manages to weave in some progressive imagery in a series that tends to idolize the conventional nuclear family. Helen’s chance in the spotlight, as well as Bob’s time changing diapers show that a mother being the breadwinner and a father staying at home aren’t things to be ashamed of. For a film fighting an uphill battle in proving itself worthy of its predecessor, they are refreshing additions that combine with the sparkling comic value to tally up to a wholly justifiable sequel.