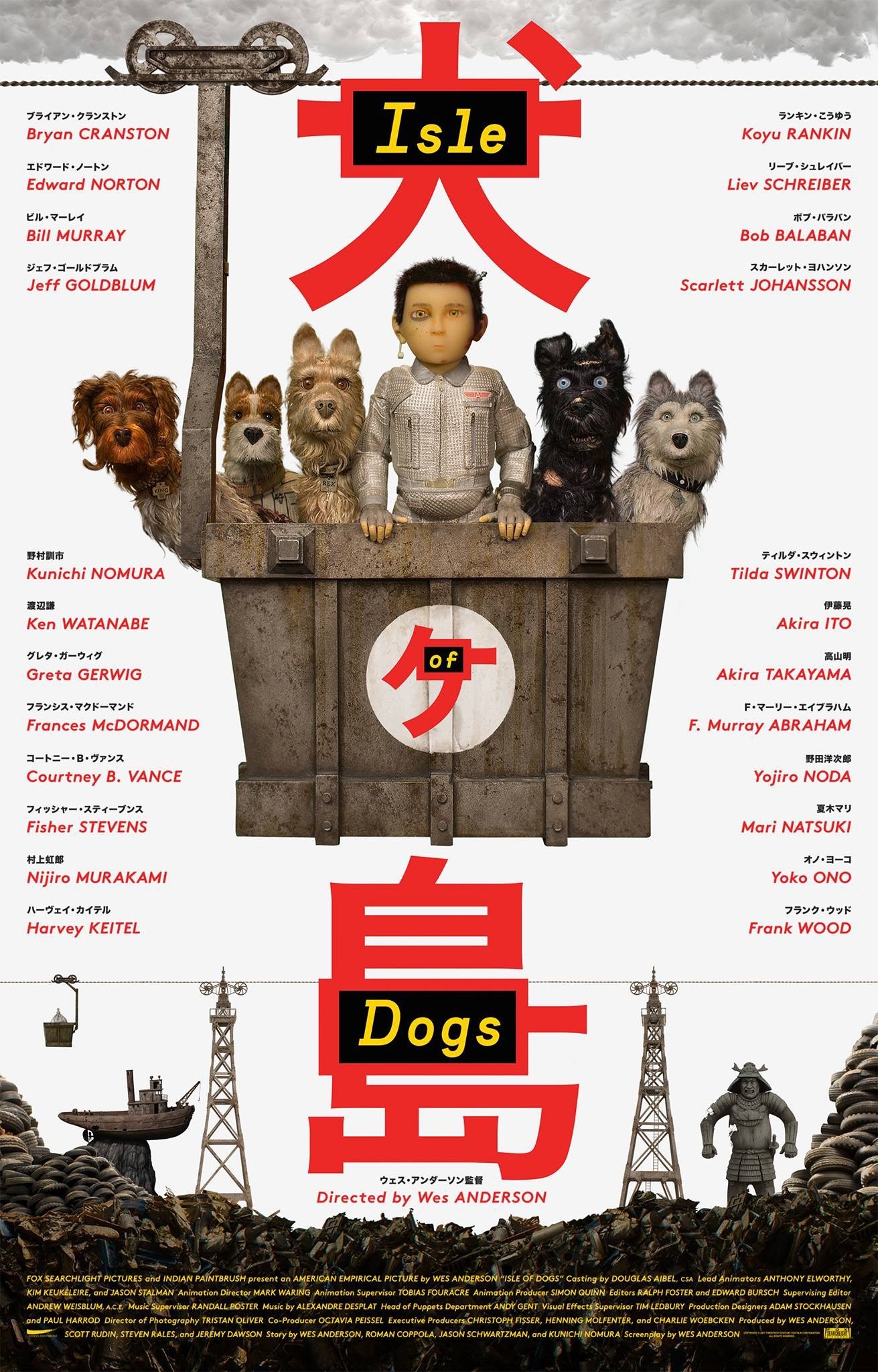 Following a four-year absence, cinema’s auteur of fastidious oddity has finally returned. Off the heels of his most successful breakthrough yet into the mainstream and Hollywood elite with his Best Picture-nominated The Grand Budapest Hotel, Wes Anderson makes his sophomore foray into the meticulous realm of stop motion with the both amusing and topical Isle of Dogs. Anderson’s second animated feature can’t top the quirky and sensational adaption of Fantastic Mr. Fox, but Isle of Dogs advances the director’s continuing ascent for exacting precise detail in his craft.

For those unfamiliar with Anderson, the director has built a reputation for heavily saturating his films with an eccentric, whimsical sense of style commandeered by an obsessive-compulsive fixation on the most minute of details. He first garnered attention for his work with his indie debut Bottle Rocket in 1996, and has churned out unique iterations of his technique with varying levels of inspiration ever since. In 2014, he tailored his approach to an artistic apex with his Oscar-winning The Grand Budapest Hotel, bolstered by both poise and poignant subject matter.

Anderson has been dabbling with stop motion since employing cheesy creature effects in The Life Aquatic with Steve Zissou, but didn’t commit to a full-length feature until Fantastic Mr. Fox in 2009, and it was easily one of the highest points of his career. The medium of animation is an impeccable fit for the filmmaker, and especially so stop motion, which offers him boundless opportunity for the visual world-building he adores so much, as well as the ability to apply the dictatorial extremes to static clay figures that he typically loves to direct toward his actors.

Isle of Dogs (say it five times fast – you’ll get “I Love Dogs”) is Anderson’s response to those who pinpoint the noticeably rough treatment canines receive in his films, most famously in Moonrise Kingdom when a furry friend took an arrow in the neck. The incidents are likely just examples of his distinctive comic edge and resistance of conventional cutesy, but he has sparked the ire of doggy allies all the same. His attempts to atone here will probably be lost on the pet crowd however, as dogs are diseased, starved, and marooned to fend for survival in a waste refuge.

20 years in the future, the canine population of Japan is ravaged by a rampant dog flu virus that is on the cusp of infecting humans. The despotic mayor of Megasaki City, Kobayashi (Kunichi Nomura), signs a decree banishing all dogs to Trash Island. In a demonstration of commitment, the first dog to be purged is Spots (Liev Schreiber), the guard dog of Atari (Koyu Rankin), the mayor’s ward and orphaned 12-year-old nephew. Six months later, Atari pilots a plane and crashes on Trash Island, where he meets a pack of five dogs who agree to help him recover Spots.

The remainder of the film encompasses political upheaval involving a group of high school activists led by an American foreign exchange student (Greta Gerwig), an assassination plot on the mayor’s part to extinguish a scientist (Akira Ito) and his efforts to find a flu cure, and a perilous journey across Trash Island. During this quest, young Atari is escorted by an all-star dog cast that includes former house pets Rex (Edward Norton), King (Bob Balaban), Boss (Bill Murray), and Duke (Jeff Goldblum), as well as a hardened stray named Chief (Bryan Cranston).

Isle of Dogs comes at a time in Anderson’s career when a wise level of discernment over his methods has met with a crescendo for elaborate, yet restrained spectacle. Four years after exhibiting an undeniable artistic prowess in The Grand Budapest Hotel, Anderson continues to impress in Isle of Dogs by taking no frame for granted. Characters, props, and environments are rife with detail to be explored in repeat viewings. Details as simple as credits, dubbing, subtitles, and flashbacks take full advantage of every opportunity for creativity and playful delights.

An unfortunate side to Isle of Dogs, however, is that it is representative of a career-spanning misunderstanding on the director’s part for racial sensitivity. The concept of white Americans producing a film about Japanese culture is irreparably problematic, and the exaggerated features on the Japanese characters are distinctly evident of an outsider’s perspective. This is irrefutably a case of cultural appropriation, however, a profusion of Japanese cast members as well as Anderson’s obvious respect for the culture render the misguided endeavor more tolerable.

The portrayals are also easier to forgive when considering Isle of Dogs offers ethnically sensitive undertones in other areas, and is easily the most socially conscious work of Anderson’s career. A mythic prologue establishes the centuries-long history of conflict between dogs and humans, likening them to Israelites under Egyptian rule. The “anti-dog hysteria” that is depicted with a mass deportation evokes the holocaust, not to mention the Syrian refugee crisis or immigration policy. With timely material for the Trump era, Anderson has never released a film so relevant.

But while the movie boasts more pertinent commentary than any Anderson picture prior, it falls victim to one of his most common failings, in that his passion for detail comes at the expense of resonant character arcs. The pack of five dogs are introduced with Rex as the most prominent, but Anderson’s tendency to strictly restrain his actors renders most of them as background fodder, with four of them getting effectively sidelined by the middle of the film. Cranston’s Chief rings in as the most developed pooch, with a compelling analysis of his anti-domestic nature.

The humans, however, remain paper-thin. Atari, for example, is simply a boy missing his pooch, while his power-hungry uncle is just a doggy-hating tyrant. Other areas for improvement concern an inconsistent focus on characters and a central conflict that is resolved too hastily. The pacing is also uneven, but in the long run, none of these issues can put a muzzle on Anderson’s sizzling wit and charm. Isle of Dogs isn’t Anderson’s best film, but it’s certainly one of his better ones, and it should leave audiences begging for more animated features from the director.