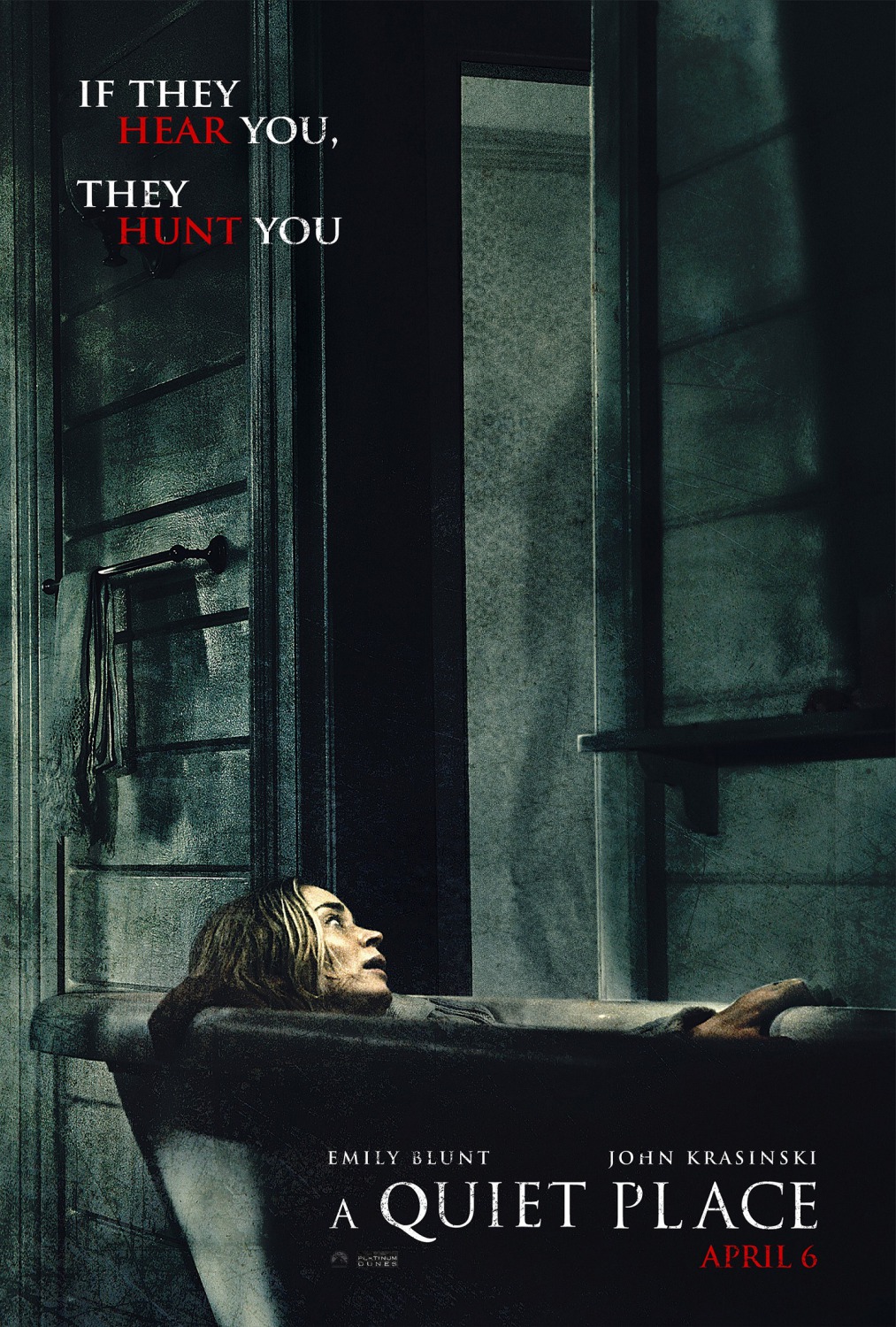 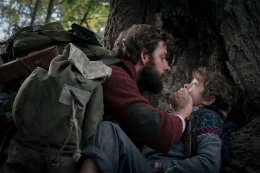 Cinema’s latest horror hit might be distinguished by its bouts of prolonged silence, but this scare fest is anything but a snoozer. A Quiet Place is a searing firecracker of a thriller, heralding a startlingly impressive turn for The Office alum John Krasinski in his directorial breakthrough. Featuring a barren post-apocalyptic landscape ruled by creatures who hunt by sound, A Quiet Place boasts an innovative premise for horror – a difficult prospect to achieve – and shatters expectations in execution thanks to an exemplary cast and a masterly orchestration of tension.

When you first see the film, you’re in for plenty of shocks, but none are as jarring as the unforeseeable display of talent John Krasinski brings to the table. As director, writer, and main cast member alongside his wife, A Quiet Place is entirely his show, and the level of mature confidence here is leagues beyond his past work. Aside from his recent dramatic turn in Michael Bay’s 13 Hours, Krasinski’s acting roles have been mostly relegated to the dopey straight man routine, while his directing experience has been limited to a pair of fizzled Sundance comedies.

In A Quiet Place, however, our messy-haired Jim Halpert has done a total 180 from every-man goofball to an utter maestro of scares. His debut horror film is one of the best of the decade, and earns prime real estate in the pantheon of genre classics. In a category heavily polluted by endless reliance on tricks, gore, and clichés, and typically confined to the cinematic dead seasons, Krasinski has entered by way of the genre’s degree of low-risk opportunity afforded to untried directors, and has demonstrated a remarkable capacity for the style in operation.

Set in the year 2020, the film introduces us to a daunting post-apocalyptic future in which most of humanity is wiped out by vicious, powerful creatures who are blind, and hunt by an extreme sensitivity to sound. Lee Abbott (John Krasinski), along with his wife Evelyn (Emily Blunt) and his two children, Regan (Millicent Simmonds), a deaf tween and Marcus (Noah Jupe), an elementary-age boy, have adapted to survive in this bleak future by communicating with sign language and eliminating nearly all noise from their daily activities in their rural country home.

The movie’s concept was developed by writing duo Scott Beck and Bryan Woods, a pair of Iowa natives who spent a lot of time poring over silent films in college. They have written for horror before with the obscure thriller Nightlight, but A Quiet Place represents their first major Hollywood project. The film realistically incorporates ambiance of the writers’ youth growing up in the Midwest, with the corn fields, silos, and farm houses of their upbringing furnishing a dreamlike rustic landscape, and a barbarous playground for the sightless beasts to wreak havoc.

Krasinski picked up their spec script in 2016, and was drawn in by the themes of familial protection, relating them to his own family. He then bought and re-wrote the script with plans to direct, and showed it to his wife, Emily Blunt, who begged for the opportunity to star in the film. By featuring an actual husband and wife in headlining roles, A Quiet Place seizes the advantage of augmented credibility, with the couple’s authentic affection permeating each frame. It also helps that Emily Blunt is a proven and exceptional actress, as does the superb casting of the children.

Millicent Simmonds, who made her debut in last year’s Wonderstruck and is deaf in real life, draws from experience with her own disability to pack one of the standout performances of the film, with her convincing portrayal of the frustrations of a deaf child in a world where auditing your own level of noise is of paramount importance. Noah Jupe, who portrayed Jack Will in Wonder last year and the most redeemable character in Suburbicon, also excels as a boy forced to mature at a young age to protect his family, despite his raw fear of the threats listening to him.

Speaking of fear, A Quiet Place is quite simply terrifying, and delivers some of the most effective scares seen in horror for years. The movie’s unique premise paves way for Krasinski to wield a remarkable balancing act between silence and sound to achieve an inventive and overpowering sense of tension from beginning to end. While the film is not immune to some cheap fake-outs, Krasinski floors at his skill with crafting discomforting atmospherics. The creatures by the way, clearly take design influence from Alien, and are nothing short of beautiful in their savagery.

In the absence of sound, the focus shifts to what is on-screen, allowing Krasinski to make full use of the cinematic art form by placing enhanced pressure on set design and visual cues. The resulting minimalism requires a higher measure of inference on the viewer’s part, and places a greater charge on acting and direction. Krasinski and his crew easily rise to the task. He could stand to have some more experience with dramatic acting, but if A Quiet Place is any indication, tension and horror are the man’s forte. Let’s hope he returns to the director’s chair soon.