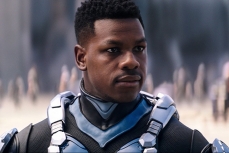 The long-delayed sequel to 2013’s metal-versus-monster bombshell may bear the recently emboldened Del Toro name, but this is no Shape of Water, folks. What once was characterized as a Transformers/Godzilla mash-up with a measure of taste has plummeted to the ocean depths to mold over with the likes of content from Michael Bay and Roland Emmerich. Considering the genre, weak storytelling and forgettable characters are to be expected, but with lower stakes and hardly any impressive Jaegar/Kaiju showdowns to show up for, Pacific Rim: Uprising is a colossal disappointment.

Del Toro only agreed to direct the initial Pacific Rim as a backup plan after his dream project of adapting At the Mountains of Madness was ripped away, paving the way for one of the most satisfying monster brawlers to grace our screens in decades. Travis Beacham’s vision of gargantuan cyborgs piloted by vulnerable men and women took a page from the juvenile mythology of the boneheaded Transformers franchise, and injected a beating heart. Pair them opposite horrific, behemothic alien beasts, and you’ve got yourself one jaw-dropping spectacle.

Bolstered by a director with a firm grasp on compelling drama, as well as a unique flair for fantasy, Pacific Rim represented a near-ceiling for whatever artistry can be achieved with testosterone-fueled titan match-ups. Emanating an unmistakable affection for classic Japanese Kaiju cinema, as well as a profound reverence for visual effects technicians such as Ray Harryhausen and Ishirō Honda, Del Toro’s post-apocalyptic narrative never lost sight of its childlike wonder, and always put its human pilots ahead of giant robots and bloodthirsty lizards.

In Uprising, however, those days are behind us. Since before the release of Pacific Rim, Del Toro intended to write and direct a sequel, but after several delays and a sale of Legendary Pictures to the Wanda Group in China, Guillermo ultimately forfeited his duties in favor of helming The Shape of Water. Considering that project’s lovely end product, and that the man walked away with nothing less than Oscars for Best Director and Best Picture earlier this March, one can hardly say that it was a poor choice, but the effects on the Pacific Rim franchise have not been kind.

In comes Steven S. DeKnight, a television veteran with producing and writing credits on such series as Buffy the Vampire Slayer and Smallville, but whose greatest contribution thus far remains executive producing Spartacus on Starz, a sizzling actioner that exhibited a remarkable range of ups and downs during its run. The leap from television to film, however, is a significant one, much less transitioning to a $100 million-plus spectacle after only having experience directing a select few episodes for TV. DeKnight’s lack of expertise is felt, and the film resonates as a mess.

Oddly enough, the most aggravating aspect of Uprising is not its sloppy set pieces, paper-thin characters, or even DeKnight’s eagerness to align the franchise with the Transformers crowd. Whereas most blockbuster sequels are accused of inflating the scale and tension to bombastic proportions, the first follow-up to Pacific Rim is a bizarre case in that it reins in the stakes to the point that it feels utterly unnecessary. In most circumstances, restraint in scope usually affords space for stronger storytelling, but Uprising will leave you feeling nothing but shortchanged.

How did this happen? For starters, if you saw the original, you would know that Marshal Pentecost (Idris Elba) gave his life to collapse the underwater breach from which the cataclysmic Kaiju beasts emerged. Raleigh Beckett (Charlie Hunnam) and Mako Mori (Rinko Kikuchi) then stopped the alien threat for good. Cut to 10 years later, in Uprising, Pentecost’s son Jake (John Boyega) has a relatively easy life scavenging Jaegars for the black market. The Kaiju race remains eliminated, the Jaegar program hardly exists, and no real threat appears to be on the horizon.

In Del Torro’s film, the world was exhausted from fending off Kaiju disasters for decades, and with little time before an increase in attack frequency, the Jaegar program was humanity’s last-ditch effort to ward off the surefire apocalypse, manned by renegades without political backing. In contrast, Uprising represents a world at peace, completely free of Kaiju. Worse, for some reason, the Jaegar program only consists of adolescents in training, and there are little to no veteran pilots to have respect for. Worse even still, there is barely any Jaegar-on-Kaiju combat.

Explaining much more about the film’s central conflict inevitably invites spoilers, but what I will tell you is that peril takes far too long to emerge, and what we get is far from sufficient. John Boyega, fresh off his recent Star Wars fame, scores the gig as Jake Pentecost here, and whatever maverick charisma he can muster is lost on a nonchalant character with little appreciation for his father’s sacrifice in the Kaiju war. I have my reservations about Charlie Hunnam’s ability to shoulder a blockbuster, but Beckett resonated as a far more compelling central character.

At the end of the day, Uprising is just simply a different animal than its predecessor. Other than a hands-off producing role, gone is Del Torro, and with it goes his competency for rich narrative, his distinctive brand of fantasy, and his palpable childlike glee at pitting massive cyborgs against colossal alien monsters as if it were his second-grade recess. But even if you couldn’t care less about effective writing or characters, you will still be disappointed, because Uprising can’t even offer what you’re bound to show up for, and that’s impressive robot-on-alien warfare.