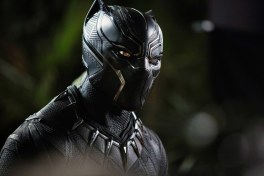 In our current moviegoing climate, a fresh Marvel movie dominating the box office is certainly no surprise, but the jaw-dropping gargantuan success of Black Panther is nothing short of astounding. The glittering allure of the Marvel brand name alone is certainly enough to ensure the film’s success, but a $200 million-plus opening box office take, in the typically lifeless month of February no less, is a runaway eruption of staggering success. Every day that goes by, the headlines are updated with new records the movie has broken, but does the film’s quality justify the excitement?

Perhaps not quite to that degree, but Ryan Coogler’s blazing bombshell of a hit effectively packs more social commentary than any superhero movie in recent history. As far as comic spectacles go, Panther is rather standard fare, yet it’s executed fairly competently from start to finish. What elevates the material is its significance within black cinema: though just a cog in Marvel’s machine, the credits from director down to extras are virtually totally African American, delivering the largest film event the black community has ever had the chance to offer.

The fact that what is sure to be one of the biggest blockbusters of 2018 comes almost entirely from African Americans is certainly a step forward for the culture, as well as the industry at large, but the movie’s value to the black community is not reason alone to endorse the work’s artistic endeavors. Thankfully, Black Panther’s design and delivery are polished and efficient to a level to warrant consideration beyond just academic study of its social achievements. You won’t need a Ph.D. in African American studies to love Black Panther, just a ticket and a bag of popcorn.

Black Panther focuses on the fictional African country of Wakanda, home to vibranium, a powerfully potent metal and closely-guarded secret that provides Wakanda its wealth and relative peace that is painstakingly obscured from the outside world. The kingdom is also home to a mysterious heart-shaped herb which is administered to each king to imbue him with heightened abilities, allowing him to become the “Black Panther.” In order to protect their fragile prosperity within a hectic world, Wakandan spies are embedded in every nation on earth.

Viewers first met Chadwick Boseman’s Prince T’Challa in 2016 in Captain America: Civil War. T’Challa’s father, King T’Chaka (John Kani) was tragically killed in an attack on a conference in Vienna to ratify the Accords to govern the actions of the world’s superheroes. In Black Panther, T’Challa is finally crowned king of Wakanda. Meanwhile, a threat rises up from on old enemy as Ulysses Klaue (Andy Serkis) steals vibranium with the help of his accomplice Erik “Killmonger” Stevens (Michael B. Jordan), causing T’Challa to unearth old secrets from T’Chaka’s reign.

A benefit to Marvel’s approach with the Black Panther adaptation is that it skirts well-trodden superhero conventions by not spending undue time with an origin story. Rather, the film offers a glowing fantasy story by teaching the warm history of Wakanda without unloading so much information so as to go over the audience’s heads. Coogler’s film also toys with expectations: I’ll try to avoid spoilers here, but the movie includes a villain shakeup akin to Iron Man 3 that is far more effective, and not at all likely to anger comic fans the way Shane Black’s sequel did.

Chadwick Boseman brings a solemn gravitas to T’Challa with thorough class. Danai Gurira brings a fiery intensity as Okoye, T’Challa’s bodyguard. Andy Serkis is a riot as Klaue, and though I won’t get into depth for spoiler reasons, Michael B. Jordan (in his third film with Ryan Coogler) soars as one of the Marvel universe’s most compelling villains, emanating a heartfelt anguish of the black community. Coogler’s direction remains consistent in his biggest project, and his script written with Joe Robert Cole is mostly strong, save for a glaring writing shortcut.

But where Black Panther is merely another solid comic adaptation in a crowded marketplace, it is the sole member of a superhero club rich in thematic depth. The idea of a nation in Africa secretly boasting untold wealth, peace, and technological miracles is a concept personally powerful to a race of people whose homeland is stereotyped as filthy and rife with violence and corruption. To a culture who went from kings, to slaves, to still having limited influence, the idea that one of their countries secretly holds the world’s ultimate power is a compelling fantasy.

More than this, the film explores ambiguous moral quandaries, such as the responsibility that comes to having great power. As T’Challa becomes king, he must grapple with the decision of keeping up his people’s tradition of desperately guarding their discovery for fear of losing what they have, versus coming out and empowering Africans who are under untold suffering across the world. The subject is relevant to today’s era, where nations beyond just the U.S. are wrestling contrasting nationalist concerns with humanitarian efforts in increasingly unruly times.

Following a stellar 2017 in comic adaptations, 2018 is off to a terrific start, and if the box office runs for the rest of the year’s superhero offerings are anything like Black Panther, I think we can expect to see even more of them in our theaters than we already do. Thankfully, studios seem to be only getting better, as Black Panther offers far more than escapist thrills for moviegoers, with social value that hasn’t been seen from Marvel since the first Iron Man. If Hollywood can offer more comic films like this one, I’m more than willing to let this fad continue on a bit longer.

One thought on “Black Panther Review”