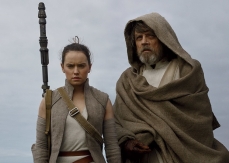 Fans of the force can rejoice – Star Wars: Episode VIII packs thrills, amazement, jaw-dropping action and surprises galore to deliver the most formidable entry since The Empire Strikes Back. Star Wars newcomer Rian Johnson, a proven director, but a novice for a production of this magnitude, meets expectations in his capacity to ingrain the gargantuan spectacle with an outsider’s affection for the beloved material. Similar to recent Star Wars entries, The Last Jedi adheres a little too closely to nostalgia, but is better successful than its predecessors at forging new paths for the rich franchise.

No other series in cinema history has had a stronger impact, or has left as indelible an impression on pop culture than Star Wars. George Lucas’s inaugural film changed the landscape of movies forever, and its two sequels didn’t disappoint. Lucas’s prequel trilogy, however, favored digital effects over sound storytelling and acting, and he’s paid the price from resentful fans ever since. With his monumental sale of Luscasfilm to Disney in 2012, Mr. Lucas finally relinquished creative control, and the property has flourished under new ownership ever since.

(Check out the Franchise Review for added background on FilmSentinel’s take on Star Wars.)

Though lush in rewards, the two latest chapters in that galaxy far, far away have represented Disney’s modern approach of exploiting past sentiment as a cash cow. It was only fitting that J.J. Abrams was chosen to helm the new Star Wars trilogy, a director characterized (though mostly unfairly) of pandering to fan service in his Star Trek reboots. The Force Awakens was a sensational new step forward for the series, but was too often steeped up in nostalgia. Set as a prelude to A New Hope, Rogue One was justified in evoking the past, making one crave fresh content even more.

Just as handing the reigns off to Irvin Kershner for Empire led to one of the greatest cinematic achievements of all time, handing the baton to Rian Johnson for The Last Jedi lays fertile groundwork for a clean break from the reminiscence, and a firm leap into worlds unknown. Unfortunately, what follows isn’t quite the case. Just as Abrams’ sequel mirrored elements of A New Hope, Rian’s echoes beats from Empire. Some content inevitably resonates as retread, but if that means delving into thematically deeper waters, the film could certainly be worse for wear.

In our last Star Wars chapter, we met Rey, an orphaned desert planet scavenger with force powers; and Finn, a disobedient stormtrooper, as they got caught up in the Resistance against the First Order, a malevolent military state under the influence of Kylo Ren, an unstable Sith in training. The Last Jedi picks up with the Resistance under Leia’s command, fleeing the First Order by making jumps to hyperspace, and quickly running out of gas. In search of hope, Rey has found Luke Skywalker in a self-imposed exile, who appears over the Jedi lifestyle for good.

Take a macro-level perspective, and you’ll find The Last Jedi heavily imitates The Empire Strikes Back. The first act encompasses a confrontation between rebel fighters and the current malicious power faction, and as the core players flee capture and try to devise salvation, breaks are taken checking in with a would-be Jedi talking a revered master out of seclusion. After two nostalgia driven sequels, The Last Jedi isn’t quite as fresh as one would hope, yet Johnson’s script manages to deliver enough startling twists and exhilarating revelations to enrapture any Star Wars fan.

Despite meeting the Disney quota of evoking the familiar, Johnson’s film still offers a surfeit of new content to further flesh out Star Wars’ already massive mythology. Kelly Marie Tran crushes casting conventions and lights up the screen as the delightful new Resistance character Rose Tico. Though dangerously close to ewok territory, the aghast chipmunk-like porgs of Ahch-To are endearing and hilarious. Several new locations are aesthetically exquisite, including Crait, with its dazzling contrast of salt deposits against its red soil, as well as the ritzy casino Canto Bight.

The delayed gratification of Skywalker’s late arrival in Episode VII is more than compensated for, as the towering Jedi master will floor fans with force powers never-before-seen in Star Wars. While only teased previously, terrifying new villain Snoke plays a larger role, even addressing a concern with the previous film – that of Kylo Ren’s pitiful combat performance. Having wrapped her scenes just prior to her untimely death last year, Leia’s involvement in the The Last Jedi invokes Carrie Fisher’s passing and in only the most soul-stirring and uplifting ways possible.

Drawing on material from Empire Strikes Back, Johnson’s film handles darker subject matter, and yet he succeeds in crafting a singular vision for The Last Jedi. As Rey learns more about the force, she tackles her demons in a similar fashion as Luke in decades past. This time is different, however, with the descent into the dark side going uncomfortably deeper than ever before, and exploring moral ambiguity with more nuance. Back with the Resistance, Johnson fascinatingly deconstructs the ideals of heroism, contrasting the merits of martyrdom and survival.

As with any major nerdverse installment, The Last Jedi has its share of disgruntled fans, and this time much more than deserved. The answer of Rey’s parentage might disappoint some, but grounds the character as more down-to-earth. There are also those irate with the perceived political commentary, but this is clearly not the first episode with powerful women, and the very inclusion of an Asian character is little grounds for offense. This time the critics are right, and even though The Last Jedi is far from perfect, it’s an invigorating new chapter for the franchise.