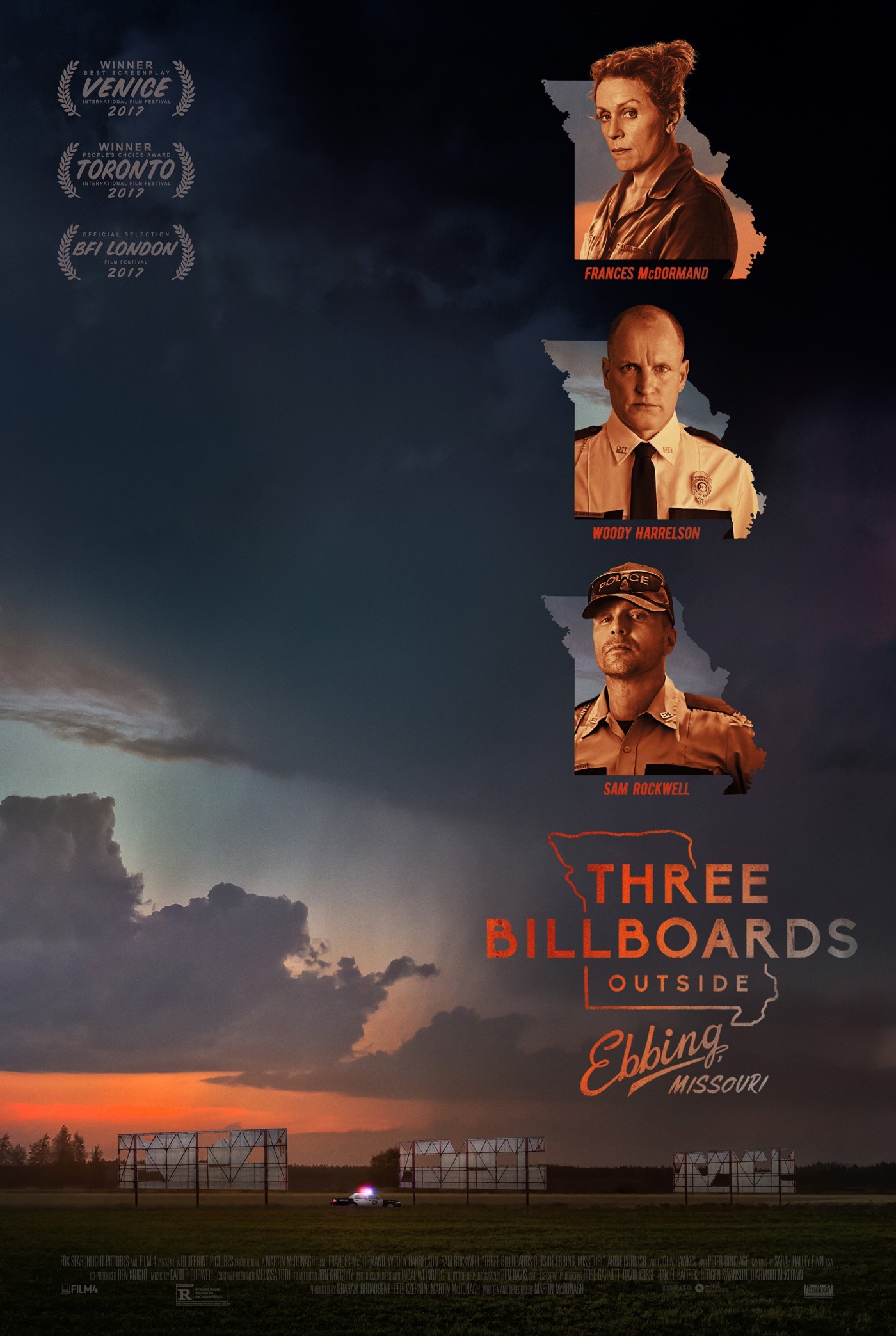 “Anger begets anger.” The aforementioned Mahavira proverb shows up in Three Billboards Outside Ebbing, Missouri as part of a gag, attributed to a character who obviously lacks the intellectual depth to have conceived of it herself. Despite its satirical delivery, however, the quote fittingly encapsulates the thematic material of the entire film. In fact, the reference is woven in so perfectly it accurately represents the feature’s distinctive genre stylings as well. Contrasting gut-busting laughs with raw, heartfelt tragedy, Three Billboards is one of best films of 2017.

Following two prior eccentric black crime comedies, Three Billboards Outside Ebbing, Missouri is the third production written and directed by Martin McDonagh, a prolific British playwright who has been quoted as having a “respect for the whole history of films, and a slight disrespect for theatre.” McDonagh began to prove this sentiment when his directorial debut In Bruges was nominated for an Academy Award for Best Original Screenplay in 2008, and again in 2012 when his off-color ensemble romp Seven Psychopaths asserted his mischievous sensibilities even further.

In Three Billboards Outside Ebbing, Missouri the burgeoning filmmaker’s craft is matured to magnificent perfection. McDonagh’s tricky balancing act between intoxicating black humor and dramatic sophistication reaches a staggering crescendo here one would have previously thought impossible. As the director’s latest diversion unfurls, it initially strikes as another standard exhibition of small-town quirk. Soon however, the layers multiply, the shocks escalate, and the despair sharpens, all expertly counterposed by incendiary hilarity – until your jaw hits the floor.

Frances McDormand plays the uproariously unruly, hotheaded and demanding, yet grieving and heartbroken torpedo Mildred Hayes. Her daughter Angela (Katherine Newton) was raped and murdered a few months back, and she is furious with Ebbing’s law enforcement for failing to solve the case. In response, she contracts three billboards outside town to deride the infamous cops. Cruising in the opposite lane, Sam Rockwell’s Officer Dixon encounters the ads in reverse: “How come, Chief Willoughby?” “And still no arrests.” Next, the kicker: “Raped while dying.”

The intimate community of Ebbing, Missouri despises their local police. Known for torturing black residents and assaulting civilians, the consensus shares Mildred’s frustration; however, they don’t support the singling out of Chief Willoughby. Terminally ill with pancreatic cancer and only months left to live, Chief Bill (Woody Harrelson) is a surprisingly good sport about the defamation. The officers on his force, though, are outraged, and Mildred’s steadfast resolve opens up a local war that exposes long-guarded secrets and old wounds in which no one is safe.

That’s just the beginning: Three Billboards features a myriad of twists and revelations that upend the playing field multiple times over before the credits role. The film’s labored plot and audacious tonal mashups constitute an unwieldy undertaking that would indisputably collapse on paper, but McDonagh’s prior experience and cast aid him at forging an on-screen miracle. Classic, yet innovative dismantling of small-town romanticism, and artful sequences offsetting devastating chaos with pensive musical cues only begin to describe this stunning masterwork.

I’ll say it now: Frances McDormand delivers the greatest female performance of 2017, and any hesitation to bestow her with an Oscar this February would be a crime. Unforgettable when riotously agitated, agonizingly affecting in nuanced silence, this is what great acting is all about. Similarly, Sam Rockwell floors in his second collaboration with McDonagh. Rockwell’s Officer Dixon begins the film as contemptible scum, and McDormand ferries the cop through an unforeseeable journey that flips an atrocious racist into a crowd-pleasing sympathetic hero.

Other stand-out performances include indie-requisite Lucas Hedges, Woody Harrelson tearing heartstrings in an unpredictably brief screen-time, and John Hawkes offering an untamed parent to match McDormand. Also, Caleb Landry Jones is cast perfectly as yet another sleazeball, and fan favorite Peter Dinklage elicits some authentic laughs. Thanks to the help of an outstanding cast, Three Billboards is one of the most memorable films of 2017. With mesmerizing oscillations between humor and heartbreak, this is McDonagh’s full-realization as a filmmaker.