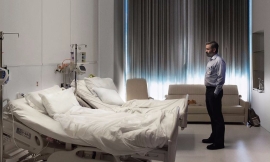 You’ve seen psychological horror before, but you’ve never seen it like this. Following 2015’s acclaimed The Lobster, Yorgos Lanthimos broadens his fascinating foray into the conceptually bizarre with The Killing of a Sacred Deer. The filmmaker’s latest is an unrelenting descent into the abominable, a disturbing exploration of one father faced with an unthinkable choice as his mistakes and guilt return to haunt him with a ghastly vengeance. With sophisticated direction, refined performances, and a hair-raising soundtrack, Lanthimos succeeds with aplomb at presenting the arthouse crowd with surrealist terror.

The director opens his newest film with a lengthy, shocking close-up of an exposed organ pulsating in the midst of open-heart surgery. Viewers with no medical background will likely recoil as a cut of “Jesus Christus” from Schubert’s “Stabat Mater” in F minor magnificently announces the commencement of the filmmaker’s latest dive into the defiantly peculiar. What follows is Lanthimos’ provocative study of human nature; the account of one family’s harrowing situation raises pointed questions, and as the events unfold, you may not like the answers.

Steven Murphy (Colin Farrell) is a cardiac surgeon. He has been taking a young medical hopeful under his wing, an odd, but well-meaning teen boy named Martin (Barry Keoghan), who appears to have a slight neurological disability. Martin, as Steven tells his wife, Anna (Nicole Kidman), is the son of a friend who died years ago in a car wreck, and Steven is taking an interest in the boy to help him grieve. He invites Martin to dinner one evening with his family, including his two children, elementary-age Bob (Sunny Suljic) and his teenage daughter Kim (Raffey Cassidy).

One day, Bob wakes up unable to feel his legs. His parents rush him to the hospital, where none of Steven’s colleagues are able to diagnose him, speculating he has a psychosomatic disorder. Martin corners Steven for a meeting, where it is revealed that Martin’s father didn’t die in his crash, but on Steven’s operating table the day he had a few drinks. For revenge, Martin has placed Steven’s family under a curse: Steven must kill either his wife or one child, or each of them will die a slow and painful death that progresses in four stages, with paralysis coming first.

Penned by Lanthimos along with routine collaborator Efthymis Filippou, The Killing of a Sacred Deer is a rather loose adaptation of the ancient play Iphigenia at Aulis by Euripides of the director’s native Greece. The tale, set during the Trojan War, depicted the historical leader of the Greek coalition Agamemnon in a similar circumstance: appease the goddess Artemis by sacrificing his daughter Iphigenia, or forfeit the fleet safe passage to Troy. Lanthimos updates the moral dilemma for today’s world, drawing on themes and perspectives of old-world literature.

In Euripides’ original source material, the playwright extends relief evocative of the biblical story of Abraham and Isaac, in which Artemis rescinds her ultimatum last-minute. For lack of spoilers, Lanthimos’ Steven is afforded no such clemency. The concept is fleshed out to unrelenting completion, positing rich examinations of guilt and retribution. Sacred Deer taps into primal attitudes indicative of Euripedes’ time, wherein a single man must atone for the sins of his people, lifting lessons written for ancient Greece and applying them to modern civilization.

After submitting superb work together in similar fare, The Beguiled from earlier this year, Colin Farrell and Nicole Kidman meet expectations once again in their latest indie detour. Reteaming with Lanthimos following The Lobster, Farrell’s burly surgeon is distinguished by earlier roles as more rigid and deliberate. Kidman excels as a loving and practical mother, an appearance that reminds of her work in The Others. Whether on or off-screen, Dunkirk’s Barry Keoghan is acutely haunting and chilling. Under Martin’s spell, Raffey Cassidy boasts a similar talent to unnerve.

Featuring tasteful cinematography by Lanthimos’ go-to man Thimios Bakatakis, Sacred Deer is rife with exquisite visuals. Ugly subject matter is contrasted by open and tidy set design, punctuated by memorable shots such as the opening scene’s thumping exposed organ or the petrifying sight of a child bleeding from their eyes. Though Lanthimos’ film plays as a rather straightforward, if offbeat, diversion into psychological horror, The Killing of a Sacred Deer is bolstered by artful direction and challenging themes mulled from classic source material.

THE KILLING OF A SACRED DEER