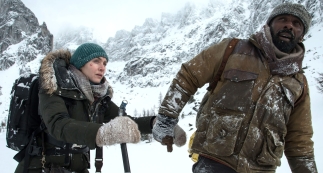 There is an idea in social psychology known as the “proximity principle.” This theory observes that people who tend to be physically close to one another are more likely to form interpersonal relationships. The latest survival picture to hit theaters, The Mountain Between Us, can be generally summed up as an illustration of this principle. More effective as a character study than a romance, the film offers no other evidence to its audience that its principle characters belong together other than the freak plane crash that, literally, forces them into each other’s arms.

The Mountain Between Us is directed by Dutch/Palestinian filmmaker Hany Abu-Assad, whose 2005 film Paradise Now was nominated for the Oscar for best foreign language film. Abu-Assad’s latest feature is an adaptation of the 2011 novel of the same name by Charles Martin. The screenplay was a joint effort by Chris Weitz and J. Mills Goodloe, and its merits hearken more back to the writers’ credits on Twilight: New Moon and May’s critically-panned romance Everything, Everything, respectively, than they do to represent Weitz’s contributions on the stellar Rogue One.

On one fateful winter day, two strangers in Salt Lake City’s airport en route to a pair of very important dates on the East Coast are greatly distressed when they are informed their flights have been cancelled due to an impending storm. Resourceful and tenacious globe-trotting journalist Alex Martin (Kate Winslet) manages to charter a private flight to make a connection in Denver. Upon overhearing the similar plight of Dr. Ben Bass (Idris Elba), Alex, on her way to her own wedding, offers an empty seat to help the surgeon arrive on time to operate on a sick child.

On their way, however, things don’t go as planned. Walter, the pilot (Beau Bridges) has a heart attack at the worst possible time, and the small plane wipes out in the High Uintas Wilderness, one of the most remote areas in United States. Ben survives the crash relatively unscathed, but Alex is left with a deep gash in her thigh (the pilot’s dog makes it out alive as well). They spend the first few days at the wreckage, clashing over personalities. When they realize the plane’s rescue beacon has been damaged, the pair embark on foot to seek out aid, and sparks start to fly.

If you’re willing to forgive the film’s stretches in believability (why did the pilot need to have a heart attack? Wasn’t there supposed to be a storm?), The Mountain Between Us actually functions quite well as an effective survival thriller. Abu-Assad handles the crash sequence quite well, showing remarkable restraint in editing of a scenario that’s been captured in film more than enough times. After the plane hits the ground, there is more excitement to be had: mountain lions, slippery cliff sides, thin ice and more. The frosty dangers are reminiscent of The Grey.

Before The Mountain Between Us takes a nosedive into love country, the movie more or less succeeds as a respectable dramatic feature. Ben and Alex, hailing from wildly different worlds, play off each other well, and are fascinating to observe interact. Idris Elba submits superb work, drawing from his English background for a naturalistic performance as a London-born physician. Winslet, however, has seen better days than as Alex Martin, missing the mark in an admittedly challenging performance as a character written as restless, irritable and invasive.

When the film’s molding as a romance comes into play, though, all engaging character dynamics are left in the cold. Elba and Winslet spar on screen fine enough, but they have no sexual chemistry at all, and the actors’ obligatory love scene is thoroughly awkward. Before things get steamy, Alex and Ben aren’t striking as a potential couple in any way. Alex is on her way to her wedding, while Ben reports to being happily married. The film offers absolutely no reason for these two strangers to fall in love other than that they happened to survive the same plane crash.

Though this survival flick is hampered by a sappy love story, it’s impeded by other flaws as well. Abbu-Assad emanates an unease with silent exposition, relying on the crutches of characters talking to themselves and to the dog. The romantic angle, however, is the Achilles’ heel that kills an otherwise favorable film. Inklings of dramatic depth persist, until the film climaxes on a horrific cliché. Yes, it’s true many relationships exist merely due to people happening to be around each other. But that’s not much of a love story. And it makes for lazy filmmaking.

THE MOUNTAIN BETWEEN US

Written by Chris Weitz and J. Mills Goodloe, based on The Mountain Between Us
by Charles Martin.